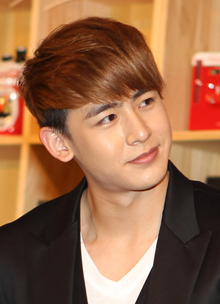 2PM member Nichkhun had some harsh words for new hip-hop group Block B, which got itself into trouble for making jokes about the Thai floods during a recent visit to the Southeast Asian nation.
Block B made the jokes in an interview with Thai Web site RYT9. When the reporter mentioned the recent floods in Thailand, which left hundreds homeless, group members used the opportunity to joke around.
"We'll do what we can by donating, because all we have to give is money," Zico said.
As soon as he said it, another member chimed in, asking, "Just how much do you have?" to which Zico replied, "About 7,000 . . . won [$6]."
The video has inspired a wave of criticism from Thai and Korean netizens and prominent K-pop artists since it began circulating here on Sunday.
Nichkhun said on Twitter that he was offended by the comments: "As a person of Thai descent, I'm offended by the careless remarks about the Thai floods. Instead of waltzing in arrogantly when visiting another country, you should be humble and have some manners."
Block B has since apologized on its official fan site.
Thailand is not the only country where the group has made culturally insensitive remarks.
In another interview with a Japanese media outlet that has surfaced online, the band joked that "Like the typhoon that happened in Japan" the band will also sweep the country clean.