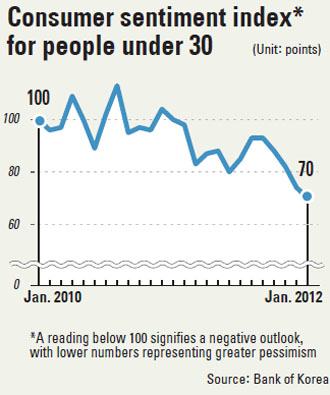 Yoo Ji-hyun, a 27-year-old student of what she calls a “so-so” college in Seoul, has been scrounging for loose change in her pockets this month as she seeks a job before her graduation in August.

“Money worries are constantly on my mind, on top of concerns that this is the first time I’m applying for jobs at my age,” she said. “Money for taking tests [to put on a resume], pricey study guides and other sundry costs are back breaking when applying for jobs.”

And Yoo is not alone. Signs suggest young Koreans under the age of 30 are experiencing increasing financial trouble as debts rise and savings shrink.

With consumer sentiment for citizens under 30 recently deteriorating to a level not seen since the aftermath of the 2008 global financial crisis, experts said the lack of income from the steady decline of youth employment over the last decade was principally to blame.

According to a breakdown of the Bank of Korea’s most recent consumer sentiment index data, the average “current livelihood” index for consumers under 30 years of age fell to 70 points in January from 74 points in December 2011.

This is the lowest drop since January 2009, when it plummeted to 69, and is 13 points below the national average of 83 points.

Such a drop in consumer confidence for the under 30 age group is no coincidence.

According to the central bank’s analysis of Korean households’ finances released last week, debt for households headed by someone between 25 and 30 years old has increased by 34 percent on-year to 14.6 million won ($13,009) in 2011.

Meanwhile, bank deposits decreased by 19 percent on-year to 17.2 million won. This is a far cry from the average savings of all Korean households, which increased by 21.2 percent over the same period to 50.2 million won.

Experts point to the lack of employment growth in the youth job market as the reason young people are in dire straits financially.

“Although the job market is showing favorable growth, most of the newly employed are people in their 50s,” said Kim Young-bong, professor of economics at Sejong University.

Moreover, the percentage of employed young people out of the total youth population - or youth employment rate - has been noticeably shrinking for the last decade.

“Since the early 2000’s, the youth employment rate has been steadily falling from roughly 45 percent in 2002 to 40.5 percent last year,” said Nam Jae-ryang, a research fellow at the Korea Labor Institute.

“Trends such as NEET [not in education, employment or training] youths and more youths becoming economically inactive are closely connected with the phenomenon.”