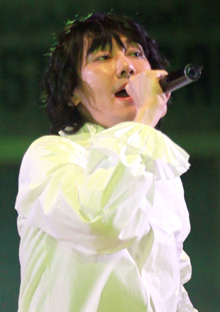 Singer and activist Kim Jang-hoon has succeeded in placing posters to raise awareness for Korea’s claim on the islets of Dokdo, in 16 cities throughout the world.

Kim is well known for his partnership with visiting professor Seo Kyung-duk from Sungshin Women’s University, a partnership that aims to highlight the issue of the so-called “comfort women” as well as Korea’s claim over Dokdo.

This time around, Kim and Seo have successfully executed the task of placing 1,600 posters in 16 cities around the globe. One hundred posters were placed in various locations in cities including New York, Kyoto, Shanghai, Sydney and Mexico.

Korean students and immigrants living in those areas were recruited to to distribute the posters in urban areas. “The collaboration work Seo and I did on the issue of ‘comfort women’ was a success. However, with this project we had a new strategy: to publicize the issue of Dokdo as well as tourism to Korea in an unobtrusive way,” said Kim.

“We used the same design for the poster, as we did on the advertisement that we took out in the European edition of The Wall Street Journal,” said Seo.

The academic said that the most difficult areas to place the posters were in Istanbul and Zurich.