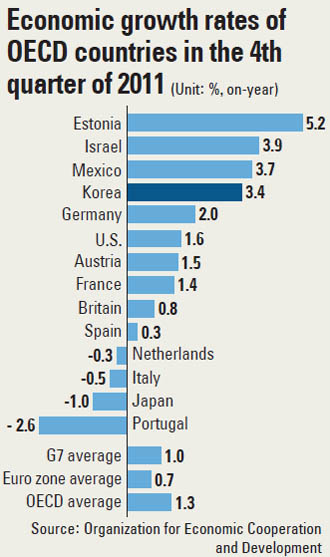 The Korean economy expanded 3.4 percent on-year in the October-December period, compared with an average growth of 1.3 percent in other OECD member countries over the same period, data showed.

The mean rate of 1.3 percent was the lowest it had been since the final quarter of 2009, when they experienced a contraction of 0.7 percent in the wake of the U.S.-led financial crisis.

However, even as Korea’s economic growth slowed to a two-year low in the fourth quarter, its economic output was still the fourth-highest among the 19 member countries.

The fastest-growing OECD economy in the fourth quarter was Estonia, which expanded 5.2 percent on-year, followed by Israel with 3.9 percent and Mexico with 3.7 percent.

Although Korea posted slower on-year growth than in the previous quarter, Asia’s fourth-largest economy was good at coping with Europe’s public debt crisis and other external uncertainties, the data revealed.

Meanwhile, seven of the world’s major economies were found to have fallen below the OECD average in the same quarter due to the euro zone debt crisis and the slow recovery of the U.S. economy.

The average economic growth posted by the United States, Japan, England, France, Germany, Italy and Canada stood at 1 percent in the final three months of 2011, compared to the corresponding period one year earlier.

Some advanced economies, including Portugal, Japan, Italy and the Netherlands, shrank in the fourth quarter from a year earlier, hit by deepening sovereign debt problems.

The OECD forecast that the Korean economy will expand by 3.8 percent this year, outgrowing the global economy’s growth of 3.4 percent.