China sends defectors back to North

China sends defectors back to North

A prison camp located in Tumen, a Chinese border city with North Korea, where defectors are allegedly held before being repatriated to North Korea. This photo was taken by a JoongAng Ilbo photographer in September 2011. It’s the same camp shown in a photo distributed by an activist in Seoul yesterday. By Kim Kyung-bin

As the administration, legislature and civic groups stepped up their pleas to Beijing to release a group of defectors recently arrested in China, Pyongyang made its first public response yesterday, telling Seoul to back off from interfering in the border regions. Uriminzokkiri, the propaganda Web site of the Committee for the Peaceful Reunification of Korea, accused South Korea of whipping up “insane chaos” over the defectors. 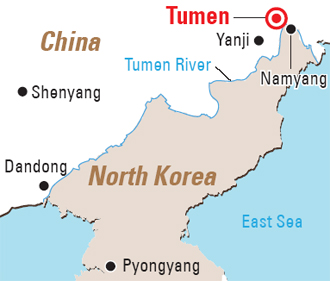 China is known to have kept dozens of North Koreans in custody in several places since early this month, according to human rights activists. The exact number is not known, but it’s at least 24 and one civic group claims the number amounts to over 80.

A source informed about the situation said nine defectors arrested in Yanji by the Chinese authorities were already sent back to the North last weekend.

Another assertion of repatriation was made by civic group NK Intellectuals Solidarity. “Of the 34 arrested defectors, three were moved to the North Korea-China borderlands of Tumen on Feb. 17,” the group said Thursday. “They were handed over to the North on Monday.”

China yesterday maintained its previous position of refusing to comment on the fate of the arrested defectors.

In a routine press briefing, Chinese Foreign Ministry spokesman Hong Lei said China has handled the matter through careful negotiations based on domestic and international laws and humanitarian principles. Hong remained tight-lipped on whether some of the defectors were sent back to the North.

A North Korea human rights activist released yesterday a photo of a prison camp near the China-North Korea border where the Chinese authorities allegedly detained the defectors, to reveal the brutal conditions the escapees have faced.

Do Hee-yoon, head of the Citizens’ Coalition for Human Rights of Abductees and North Korean Refugees, made public the photo, adding that it was taken by a Chinese resident of Tumen on Feb. 15.

Located a 10-minute drive from the North Korean border, the heavily-guarded facility in Tumen is the last stop for defectors before their repatriation, Do said. Once used as a prison for foreign inmates, the camp is reportedly being used exclusively to detain defectors.

The appeals for the defectors’ release began when Representative Park Sun-young of the Liberty Forward Party said Feb. 13 that China was about to repatriate 24 arrested refugees. The Foreign Ministry said the next day that it has asked China to not repatriate them against their will. Defectors who are sent back to the North are known to face political oppression and sometimes public execution.

On the same day, the National Human Rights Commission said a human rights group reported that another 10 defectors were arrested by the Chinese authorities and faced repatriation.

The latest appeal on the issue came Wednesday when President Lee Myung-bak expressed hope in a press conference that Beijing would handle the issue under international norms.

The National Assembly’s Foreign, Trade and Unification Committee yesterday held a meeting on the issue. “Because the South Korean government has failed to raise our voice under the mantra of ‘quiet diplomacy,’ tens of thousands of defectors were repatriated and faced public execution or detention in political prisons over the past two decades,” said Representative Park, who began a hunger strike four days ago. “It is time for our legislature to end China’s inhumane policy.”

The committee yesterday unanimously passed a bipartisan resolution to demand the government to act more aggressively to protect defectors in China.

“Until now, we have discussed what to do by having a bilateral discussion with the Chinese government,” said Foreign Minister Kim Sung-hwan. “But the recent situation shows that the talks were ineffective, so we will make a stronger demand to China.”