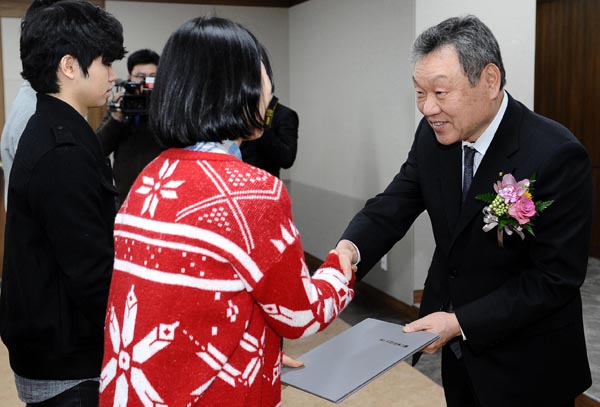 KB Financial Group Chairman Euh Yoon-dae shakes hands with recipients of KB scholarships, which were given to children of firefighters who either lost their lives or were injured while on duty, in Seoul yesterday. [NEWSIS]


KB Financial Group, which has been gearing up its social contribution and responsibility efforts lately, handed out 100 million won ($89,000) in the form of scholarships yesterday to the children of firefighters.

It invited 21 middle school and 29 high school students to its headquarters in central Seoul to receive the financial aid. In each case, one of the kid’s parents had either passed away or been seriously injured in the line of duty.

The financial firm and its social welfare organization KB Foundation created a new scholarship fund for the firefighters’ families and plans to support the students until they graduate.

“After learning that so many Korean firefighters had lost their lives or been seriously injured, we realized there was an urgent need to support these courageous men and women and their families,” said an official from the group.

“We created this scholarship to show our respect and gratitude for their selfless sacrifice and to make sure their children can concentrate on their studies without worrying about whether they can afford it,” the official continued.

As social welfare and sharing has become a hot issue in the country, the financial group has been expanding its social contribution activities this year.

It previously launched a group of volunteers consisting of 25,000 employees and executives from the financial group and its affiliates. It said the so-called “KB Star Dream Volunteers” will spend a total of over 250,000 hours a year on social contribution projects.

The volunteers will focus on four major themes: teenagers; the world, which includes multinational families; the environment; and welfare projects aimed at senior citizens.

Meanwhile, two smaller subgroups will focus on distributing emergency kits to areas that are devastated by natural disasters such as earthquakes, and educating their neighbors in a range of subjects - from financial and economic education to arts and sports - by utilizing their respective strengths and expertise.

At the beginning of this month, volunteers handed out 1,000 emergency kits to Korea’s Red Cross. “Natural disasters are becoming more frequent due to the unusual changes in the weather,” said Lim Young-rok, president of KB Financial Group.