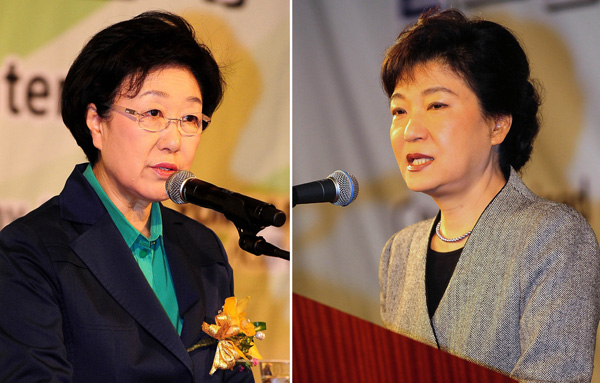 Park Geun-hye, right, the interim leader of the conservative ruling Saenuri Party, and Han Myeong-sook, left, chairwoman of the liberal opposition Democratic United Party, speaking during the International Conference on the Hosting of the 2012 Nuclear Security Summit to be held in Seoul, where they gave their keynote speeches. [NEWSIS]


The two iron ladies of Korea who lead the opposition and ruling parties showcased their security visions concerning North Korea and nuclear issues in an academic conference yesterday, offering a glimpse of their approaches toward Pyongyang’s new leadership.

Park Geun-hye, the interim leader of the conservative ruling Saenuri Party, and Han Myeong-sook, chairwoman of the liberal opposition Democratic United Party, gave keynote speeches at the International Conference on the Hosting of the 2012 Nuclear Security Summit, organized by the Korean Association of International Studies and the UN Association of Korea. Park opened the event with her address in the morning, and Han’s speech began the luncheon.

North Korea was the key topic in both speeches, but their approaches differed. While Park stressed a trust-building process between the two Koreas, Han promised a more aggressive engagement policy of talking with the new North Korean leadership.

In her speech, Park said a trust-building process on the Korean Peninsula must be implemented to allow North Korea to become a responsible member of the international community. She said the process of “trustpolitik” will begin with keeping promises to each other.

“Our North Korea policy must maintain consistency based on the public consensus, but it still needs to evolve for a better future,” Park said. “The Saenuri Party and I are willing to maintain an open attitude to support and cooperate with North Korea’s efforts to change in order to quickly repair the deepened distrust between the two Koreas after the Cheonan’s sinking and the Yeonpyeong Island shelling, and to walk on the path of sustainable peace and mutual development.”

At the same time, she said the Saenuri Party will never tolerate military provocations under any circumstances. But providing humanitarian assistance and continuing economic and exchange projects were promised as part of the trust-building process.

She also said the North will have an opportunity to escape its economic crisis as well as make progress on the nuclear issue if it wisely uses the expectations of the neighbors after its leader Kim Jong-il’s death.

She was still adamant that the North give up its nuclear arms programs, stressing that a world free of nuclear weapons must start from the denuclearization of the Korean Peninsula.

In her address, Han promoted a more aggressive engagement policy, stressing that the South must “talk with the new North Korean leaders.”

Declaring that the Lee Myung-bak administration’s North Korea policy has failed while waiting for Pyongyang to change, Han said the Democratic United Party will take initiatives to become a “creative catalyst” to resolve the North Korean nuclear crisis by using the leverage of inter-Korean relations.

“The DUP will actively work to normalize the worsened inter-Korean ties,” Han said.