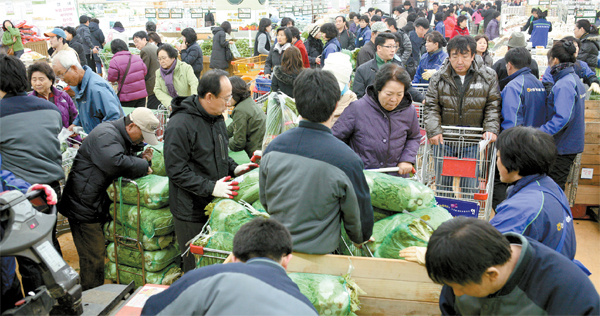 
The National Agricultural Cooperative Federation, or Nonghyup, officially splits into two separate companies today, one financial and the other industrial.

Analysts say Nonghyup’s ambition to turn the second company into a retail giant to rival local discount chains depends on whether the co-op can solve the perennial problem of distributing agricultural products efficiently.

Under the blueprint mapped out by the government and Nonghyup, 13 of the coop’s subsidiaries, including Cooperative Marketing Inc., Namhae Chemical, NH Trading Co. and Nonghyup Feeds Inc. will be under Nonghyup’s industrial holdings company by 2017. Nonghyup will inject a total of 5.9 trillion won ($5.28 billion) to build up that company.

The restructuring followed criticism that Nonghyup failed to help stabilize prices when they surged or tumbled in the past, letting down both the producers and the consumers. The new structure is supposed to improve its distribution abilities.

Established in 1961, Nonghyup is a comprehensive agricultural co-op that has credit-based financial operations, industrial enterprises and projects to educate its members, most of whom are farmers.

But Nonghyup has been criticized for ignoring the farmers and focusing too much on money making by expanding on its financial operations.

Currently, 76 percent of Nonghyup’s employees work in financial operations, while 14 percent work on the industrial side and 10 percent its educational support operations.

Nonghyup’s shortcomings as a distributor of agricultural products were highlighted in 2010 when the price of cabbage skyrocketed due to bad weather.

The price of a single Napa cabbage reached 15,000 won and Nonghyup was powerless against greedy private distributors who hoarded cabbage to keep the price up.

“We’re very much aware of the public’s criticism that Nonghyup depended too much of its financial sector and paid little attention to distribution and sale of produce raised by local farmers,” said Jang Nam-il, a Nonghyup official. “To better regulate prices of agricultural products, Nonghyup will increase its contract farming arrangements. If Nonghyup secures more freshly grown produce, we will have an advantage when negotiating prices of produce with discount chains. This will benefit both farmers and consumers.”

Currently, Nonghyup has contracts with farmers that account for around 10 percent of the country’s produce, Jang said. It wants to increase that percentage to 50 percent by 2020.

At present, private sector middlemen handle 80 percent of fresh produce sales by signing contract farming deals before the crops are grown. The middlemen pay in advance and then try to get the highest prices possible when the produce is ready to be sold.

“Nonghyup’s first task of reform is to create a system where farmers can get a decent price for what they’ve grown,” said Kim Wan-bae, agriculture professor at Seoul National University.

Aside from wholesale distribution, Nonghyup’s industrial holdings company will also expand its retail sale outlets to compete against chains run by conglomerates such as E-Mart and Lotte Mart.

Nonghyup officials said there’s potential for its stores because they’re popular with consumers.

Nonghyup’s Hanaro Club in Yangjae, southern Seoul, records the largest amount of sales per day in Korea, beating out any outlet of E-Mart, Homeplus and Lotte Mart.

“Most of customers who come to Hanaro Mart and Hanaro Club are loyal because all fresh produce and meat are domestic products whereas other discount stores sell imported goods,” said an official at Hanaro Club. “Korean customers prefer home-grown products when it comes to fresh fruit, vegetables and meat. Especially on Seollal and Chuseok, Hanaro stores are jammed with customers who want to honor their ancestors with home-grown products.”

Last July, Nonghyup finalized a plan to invest in 926 billion won to open seven large discount stores and 20 super-supermarkets in the future.

To expand its discount store chain, Nonghyup will increase the number of logistics centers to distribute agricultural products around the country.

But critics said the plan will probably take years.

“Nonghyup hasn’t decided the locations, the logistics and the plan is still vague,” said an industry source who asked not to be named “There’s only one ongoing construction project in Anseong, Gyeonggi. If it wants real battle with private-run discount stores, Nonghyup must ditch its old bureaucratic mindset and seek innovation. The decision making process in Nonghyup is way too slow and it must be more aggressive.”