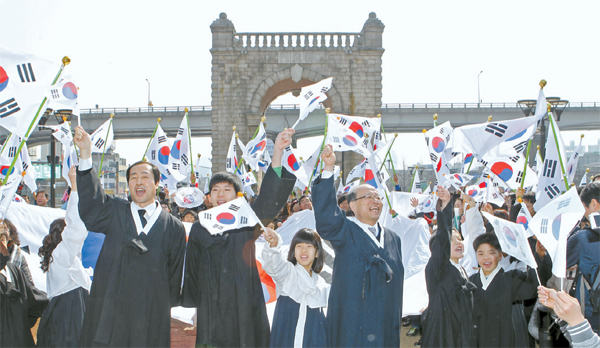 
President Lee Myung-bak yesterday implored Japan to redress the long-standing grievances over its wartime sexual enslavement of Korean women, warning that time is running out for Tokyo to settle what Seoul sees as an urgent humanitarian need.

Lee’s remarks came as Korea celebrated the 93rd anniversary of the March First Independence Movement Day, which marks the nation’s 1919 uprising against Japan’s colonial rule. In his commemorative speech, Lee made the latest in a series of appeals to Tokyo to confront its colonial past and compensate the former sex slaves, often called “comfort women.”

As young people of the two countries increasingly befriend each other, tasks still remain for Korea and Japan, Lee said.

“First and foremost, in order for the two nations to become true partners and work closely together, there has to be genuine courage and wisdom that does not neglect the truth of history,” he said. “Especially, the issue of comfort women is an important humanitarian task that should be resolved more urgently than any other issues.

“These women have harbored excruciating emotional pain all their lives,” Lee said. “Should these women pass away without seeing a settlement of the issue, the problem will not be resolved. On the contrary, Japan will be forever losing the opportunity to resolve it. That is the reason why I am urging the Japanese government to take a positive stance in solving the problem.”

The appeal was Lee’s second direct request to the Japanese government. Last December, he raised the issue directly for the first time in a summit with Japanese Prime Minister Yoshihiko Noda.

Lee’s latest appeal clearly indicated that Seoul is stepping up pressure on Tokyo. In his March First Independence Day address last year, Lee urged Japan to face its colonial past, but did not specifically raise the comfort women issue or demand an apology.

In previous years, Lee’s administration has refrained from raising the sensitive issue, based on its philosophy of pragmatic diplomacy. Its stance has changed dramatically over the past months.

While the comfort women issue was discussed more explicitly than ever in his address, Lee did not mention other sensitive matters between the two countries such as Japan’s approval of textbooks that whitewash its colonial history and territorial claims over Dokdo.

According to the Blue House, Lee also sent letters and gifts to the surviving victims as a promise of the government’s commitment to resolve the issue.

In the letters, Lee said he was extremely disappointed at the Japanese government’s attitude.

“I believe the Japanese government’s sincere apology to you is the most urgent of any diplomatic issue between the two countries,” Lee wrote. “That’s why I raised this issue alone at the Korea-Japan summit last December. It was an unprecedented move that went against diplomatic courtesy. I did it because I truly wanted to clearly address the issue.”

It remains to be seen how Tokyo will react to Lee’s latest move, as it previously has ignored pressure to compensate the aging victims. When Lee made the request of an apology and compensation during their December summit, Noda rejected the idea, saying the issue had been dealt with in the past. Japan has long said that all issues associated with its colonial rule were already settled in 1965 with a reparation package.