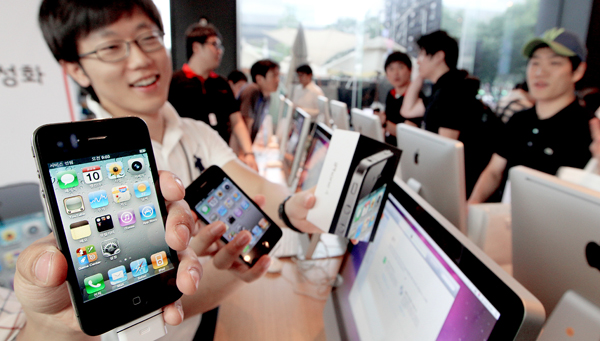 Officials in charge of Apple’s podcast business paid a visit to Korea recently to explore more business opportunities in the country, according to local media reports.

Sources familiar with the matter told Korea’s Electronics Times last week that the purpose of the trip was “to experience and support” the fast-growing domestic podcast market. The officials also discussed with their counterparts plans to set up an Asia Podcast general headquarters that will support the local market, they added. 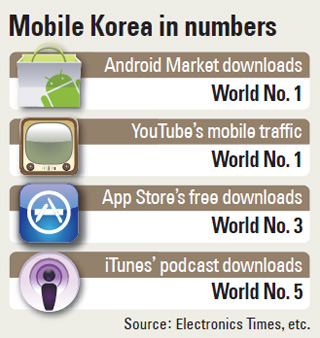 An Apple official reportedly said that the podcast of the hugely popular Korean online talk show “Naneun Ggomsuda” (“I’m a Petty-Minded Creep”), a political satire, recently became the most downloaded of all of its podcasts in the U.S.

“This makes it the first non-English podcast to achieve that milestone,” he was quoted as saying by the Korean technology daily. “We were surprised by the achievement, and we are also keeping a close eye on News Tapa, which also has a very high rating.”

The “Naneun Ggomsuda” podcast, which is organized by the Ddanzi Ilbo, an online paper, has courted controversy by featuring many satires of President Lee Myung-bak. Meanwhile, News Tapa (Tapa roughly translates as “breakdown”), is a podcast compiled by former reporters and news producers.

According to Apple officials, more podcasts are downloaded on its service in Korea than in any other country bar four. More notable still, this feat was accomplished in just a year of Apple making its Korean-language podcast service available.

Media sources point out how, among the top 100 podcasts in the region, “Naneun Ggomsuda” is the only one in a language other than English.

Korea was one or two years behind the curve in terms of adopting smartphones but it has caught up rapidly thanks in no small part to the quintessential ppali-ppali (hurry, hurry) mentality of the Korean public.

It now ranks as one of the world’s largest smartphone consumers and related content, and was the world’s third-biggest consumer of free downloads from the iTunes Store last year, according to data by Distimo, which compiles market research on mobile app stores.

On a per capita basis, the most number of downloads from Android Market occurred in Korea last year, according to Google’s official data. YouTube also reported Korea as accounting for more of its mobile traffic than any other country, also on a per capita basis.

The Korean public is also seemingly addicted to social networking services, which benefited greatly from the recent smartphone boom here. According to data by market researcher Semiocast, Korea also ranks inside the world top 10 in terms of countries with the highest volume of tweets.

Now foreign companies seem more intent than ever on learning from Korea to duplicate this interest elsewhere.

YouTube recently released a study called Mobile Video Usage Pattern Analysis based on the Korean market. The study, according to YouTube officials, will be used to devise strategies for YouTube services worldwide.

“Korean corporations and users will soon assume the role of powerful trendsetters [in the global mobile arena],” YouTube told the JoongAng Ilbo last month. “We believe we should be able to apply in other parts of the world the lessons we have learned in Korea.”

YouTube officials said the company believes that, although Koreans adopted smartphones slightly later than their counterparts in the U.S., the usage patterns of mobile content are at least one to two years ahead of other countries’.

As for why Korea was able to make such strides, Lois Kim, head of public relations and communications at Google Korea, said, “Google believes there are three reasons: Koreans’ fast accommodation to new technology, the country being home to the world’s leading smartphone makers like Samsung and LG and it being equipped with the world’s most advanced wireless networks and infrastructure.”

Meanwhile, major foreign handset makers like HTC, Sony and Motorola have been debuting their latest smartphone models in Korea before launching them elsewhere.

“They prove that Korea is no longer just a test bed for mobile businesses, but rather a key market that creates the world’s mobile trends,” Kim of Google said.

The mobile rush is even creating a new market segment within Korea.