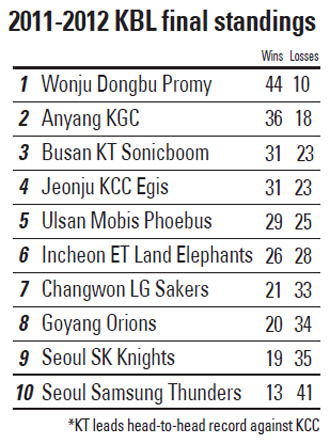 With the 2011-12 KBL regular season wrapping up on Sunday, the league will now move on to the postseason with six teams this week.

While the Wonju Dongbu Promy clinched this season’s regular season title on Feb. 14, the earliest in KBL history, five other teams also secured their slots in the playoffs last month, with only the order of the teams needing to be finalized.

Busan KT Sonicboom and Jeonju KCC Egis were fighting for third spot until the very last minute, but it was the Sonicboom who prevailed in the end.

A total of 11,042 fans visited Sajik Gymnasium on Sunday, which turned out to be the biggest crowd of the season.

On the same day, the Egis beat the Goyang Orions 88-82 and also marked the same win-loss record as the Sonicboom, but were beaten to third place as the Sonicboom led their head-to-head record with four wins and two losses this season.

As a result, the Sonicboom will meet the Incheon ET Land Elephants, the No. 6 seed, in the first round playoff, while the Egis will square off against Ulsan Mobis Phoebus, which took fifth place in the regular season.

The first round playoff is a best-of-five series that will start tomorrow with defending champion Egis hosting the Phoebus.

The winner between the Sonicboom and the Elephants will meet Anyang Korea Ginseng Corporation, the No. 2 seed, to earn a spot in the championship series.

The winner between the Phoebus and the Egis will take on No.1 seed Promy to reach the best-of-seven championship series, which will start on March 28.

During the final game on Sunday, the Promy lost 78-72 to the Phoebus at home, failing to become the first team in KBL history to collect a single-digit loss record during a regular season.

The team did, however, become the most successful defensive team in KBL history, allowing an average of only 67.9 points per game.

The Promy set the highest winning percentage in a regular season, marking 0.815.