Shareholder meetings to be touchy this year

Shareholder meetings to be touchy this year 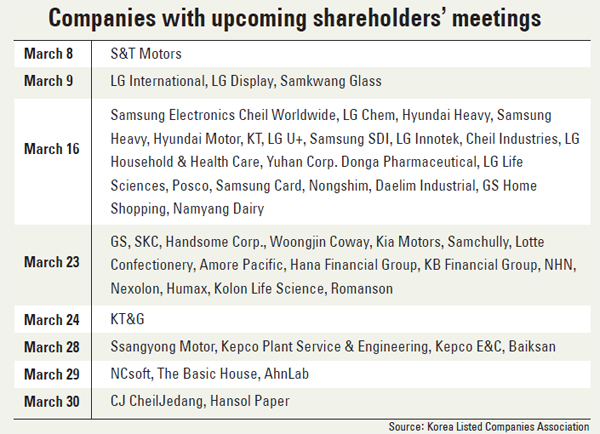 In the corporate world, March is not just the start of spring - it’s the season for general shareholders’ meetings.

This year, minority shareholders and foreign institutional investors are gathering to vent their year-long grievances and possibly flex their muscles, while the companies themselves get ready to transfuse some new blood into their boards.

This year, various companies’ minority shareholders and foreign institutional investors are expected to turn up the volume on their demands for higher dividends or participation in management.

Such signs appeared last month, when one of Korea’s top three dairy manufacturers, Namyang Dairy Products, received a notice from Lazard Korea Corporate Governance Fund, which owns a 1.8 percent stake in the company, calling for a hike in dividends to 25,000 won ($22.20) per share plus an increase in the number of shares in circulation.

This was the first time the fund, which seeks to “utilize corporate governance improvements as catalysts to potentially unlock shareholder value” while investing in Korean companies, according to manager Lazard Asset Management, made a shareholder’s proposal to Namyang Dairy.

Meanwhile, gas and pipe manufacturer Samchully can expect trouble from its minority and foreign institutional shareholders after U.S. hedge fund Baupost Group and Australia-based Hunter Hall Investment Management joined smaller shareholders to make nine demands on the company, including the resignation of its CEO.

Together, the dissident shareholders owned 32.7 percent of Samchully’s shares as of the end of last year and have a fair chance at challenging the current management, which controls a 31.5 percent stake.

The dissident shareholders’ major beef is the stunted performances of the companies’ stocks. Namyang Dairy closed at 772,000 won yesterday with a price-to-book ratio of less than one, which means either the market believes its asset value is overstated or the company is earning a very poor return on its assets.

Only 500 Namyang Dairy shares have changed hands per day since the beginning of 2012, but Namyang hasn’t done anything to encourage investments.

Hope for outside directors

Spring is also the season for games of musical chairs on companies’ boards.

According to the Korea Listed Companies Association, out of a total of 2,785 outside directors that serve at some 1,496 listed companies that end their fiscal year in December, the tenures of some 874, or 31.4 percent, are coming to an end.

Even if many companies extend some directors’ terms, a considerable number of new outside directors are expected to be seated at the boards of Korea’s biggest companies.

Record label Loen Entertaiment, an affiliate of SK Group, has offered a seat on its board to composer Kim Hyung-seok, who is known for writing hit songs, most recently on Loen’s major talent IU’s second album.

However, analysts expect most of the outside directors to fulfill their traditional role of rubber-stamping management proposals.

According to the Fair Trade Commission, some 2,020 proposals were put in front of the boards of 79 companies among Korea’s 100 biggest companies in terms of market capitalization, but only one proposal was voted down due to the opposition of an outside director.

Analysts point out that the strong involvement of major shareholders on the boards of Korean companies was one of the chief reasons outside directors appeared to lack independence. According to the Financial Supervisory Service, out of the 30 top listed companies in terms of market capitalization, 22 companies had the major shareholder or the CEO double as the chairman of the board.

Meanwhile, the Ministry of Justice announced this week that regulations limiting a person to just two outside director positions if one of the companies is listed will be put into effect starting next April.