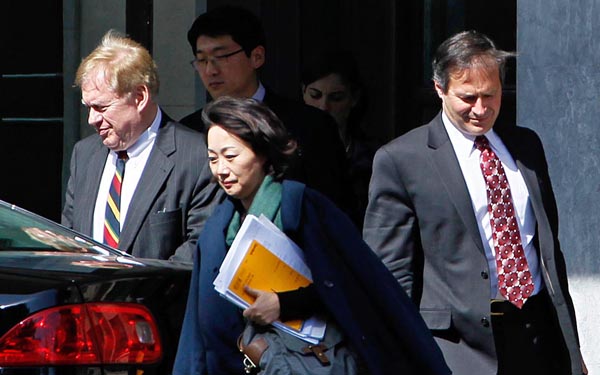 
Leading women’s groups are joining the protest against China’s forced repatriation of North Korean defectors, pointing out that many of the defectors are women and children.

About 40 representatives of the Korean Medical Women’s Association and the Korean Women Lawyers Association gathered in front of the Chinese Embassy in Seoul yesterday evening and said that female defectors who are repatriated can face sexual violence during their interrogations.

“What awaits defectors repatriated to North Korea is only death or pain worse than death,” the two groups said in a joint statement. “China’s repatriations overlook the cruel reality facing them.”

In the statement, they said defection was an unavoidable choice for many defectors to escape hunger and political persecution and China has the responsibility to safeguard the dignity of life.

The groups urged the South Korean government to spare no efforts on behalf of the trapped defectors.

China is known to have kept dozens of North Koreans in custody in several places since early February, according to human rights activists, and their plight is attracting worldwide attention.

The exact number is not known. If sent home, they could be executed or sent to political prisons.

In recent years, the number of female defectors from North Korea has grown.

“Given that 80 percent or even 90 percent of those recently defecting from the North are known to be women or their children, and sexual violence could await them once being sent back to the North, we perceive this as a grave women’s rights issue,” Kim Sam-hwa, head of the Korean Women Lawyers Association, told the Korea JoongAng Daily.

China’s state-run CCTV aired a program on the issue March 1, and a commentator remarked that if anyone will be hurt over the controversy, it will be South Korea, which some analysts called a threat to Seoul.

China, however, is taking a cautious approach to the issue and is very concerned about it becoming a global controversy, according to an official of the Ministry of Foreign Affairs and Trade yesterday.

Kim Soo-kwon, Seoul’s ambassador in charge of peace diplomacy, arrived in Beijing yesterday for talks with Chinese officials on the issue, according to the ministry.