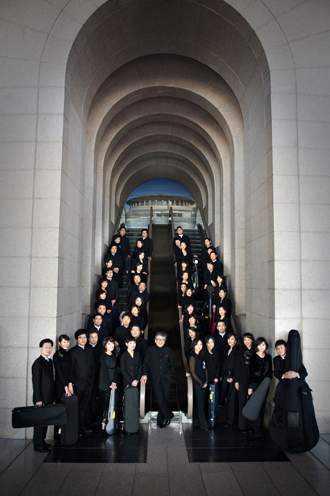 The Korean Chamber Orchestra is set to present six concerts centering on the works of Bach throughout the year. The first concert is scheduled for March 22. Provided by the Seoul Arts Center

The music of Bach will close the Seoul Arts Center’s three-year series on three of classical music’s most prominent composers, which also includes Beethoven and Brahms.

The Korean Chamber Orchestra, the country’s first and foremost chamber orchestra established in 1965, will present six concerts solely devoted to the works of Bach beginning on March 22 and continuing throughout the year as part of the venue’s Great 3B Series.

Most of the pieces to be played during the concert series will be familiar to the ear, even for classical music novices, because they are frequently used in TV commercials and films. Those new to classical music may also find the ticket price appealing; starting at 20,000 won ($18), the tickets are a bargain for pieces that are rarely played here.

The program of the first concert includes Nos. 1, 4 and 6 of the Brandenburg Concertos and Nos. 2 and 3 of the Orchestral Suite. The repertoire for the remaining concerts ranges from concertos for single or multiple pianos or violins to cantatas and the Christmas oratorio.

“Just as old automobiles need an interim inspection, our orchestra also needs to check the quality of our work through Bach, especially as we celebrate our 47th anniversary this year,” said Kim Min, the orchestra’s music director and an honorary professor of violin at Seoul National University. He is also one of the orchestra’s founding members.

“Given that Bach is the composer who enriched and established the basis for the Western classical music style, playing his music is very timely for us, when we are trying to return to the basics,” Kim added. “We intend to create a sound that is as close as possible to the authentic sound Bach created but is also as colorful as possible.”

The KCO does not necessarily have expertise in Baroque music, since its repertoire covers a wide range of music. But it is the first orchestra in the country to have played all six Brandenburg Concertos, a feat it accomplished in 2003, and it released an album of the works on the EMI label in the same year.

This year, the orchestra toured three cities in Russia from Feb. 17 to Feb. 19 and played Bach’s Piano Concerto No. 2, receiving standing ovations for its efforts.

Seoul Arts Center launched the Great 3B Series in 2010 to commemorate the three most respected composers in classical music. In the first year, the Suwon Philharmonic Orchestra, under the baton of pianist-conductor Kim Dae-jin, led the series, which focused on Beethoven. The subsequent series focused on Brahms and featured the Bucheon Philharmonic Orchestra, led by its conductor Lim Hun-joung.