Audi’s A6 named Car of the Year

Audi’s A6 named Car of the Year 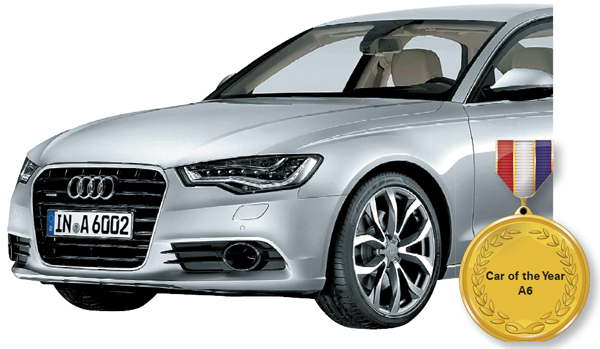 The results of 2012 JoongAng Ilbo Car of the Year (COTY) awards were revealed today, with the Audi A6, a luxury midsize sedan, taking the top honor, while Kia Motors’ boxy Ray and Hyundai Motor’s i40 midsize wagon were both named Domestic Car of the Year. 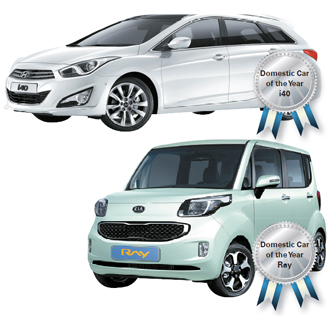 BMW’s X3 was chosen as the SUV of the Year, and the Lexus CT200h hybrid hatchback received the Technological Award. Peugeot’s 308 sedan was awarded for being the most environmentally friendly car of the year, while the Audi A7, a four-door luxury coupe, took the top honor for best performance.

Sixteen judges, each with more than 10 years’ experience in the automotive or a closely related industry, were involved in the evaluation process. They assessed 53 cars from 22 brands beginning with cars released in Korea last year.

After the first round of evaluation ended on Feb. 3, they selected 15 final candidates. These included five sedans - Hyundai’s i30 compact hatchback and Grandeur HG, the Mercedes-Benz C-Class, Nissan Cube and Chevrolet Malibu - and three SUVs, namely the Volkswagen Tiguan, Ssangyong Korando C and Mini Countryman.

Meanwhile, Mercedes-Benz’s CLS four-door coupe and the Cube walked away as the Design Award winners.

Although both the Ray and i40 were selected as winners in the domestic car of the year category, the A6 was far ahead of all local rivals in terms of its final score. It received an average of 55 points from all the judges, while the Ray and i40 each got 38.6 points.

The judges said they were impressed after driving the A6 around a racing track in Hwaseong, Gyeonggi.

“These days, many auto manufacturers are benchmarking Audi in terms of design,” said Yoon Jung-ho, former vice president of Renault Samsung Motors. “The A6 proved that it is a typical Audi with its well-designed interior and exterior and exceptional performance.”

“The A6 benefited from being tested on a well-built racing track,” said Gu Sang, a professor of industrial design at Hanbat National University. “During the high-speed drive, I got to experience the car’s optimal performance.”

The car received high scores for its interior design and finish, although some described the dashboard as being too complicated.

“Audi wanted to show everything at once, and the interior was overly complex,” said Lee Nam-seok, a business administration professor at Chung-Ang University. “There should have been some sort of moderation.”

The Ray, which earlier received the COTY Design Award, was also named Domestic Car of the Year. The judges said it would have received an even higher score, but it suffered when being test driven on the high-speed track because of its boxy shape.

“Although the car is high off the ground with lots of headroom, it remains quite stable,” said Jang Jin-taek, a journalist from Car Media. “The more I drove it, the better it handled.”

Kim Bang-shin, a senior executive at Hyosung, said the Ray has many options that are usually only available in high-end vehicles. Although it is a city car, it is equipped with an array of expensive options. Kim said the car’s price could have been lowered if these were excluded.

In the final evaluation, judges looked at ride quality, driver satisfaction, price, design, new technology, performance and how environmentally friendly the 15 vehicles are.

The Lexus CT200h received the highest score for being environmentally friendly but was unable to collect this award as each vehicle could only be honored once under the judge’s rules.

The official awards ceremony will be held at the Millennium Seoul Hilton in central Seoul next Thursday morning.