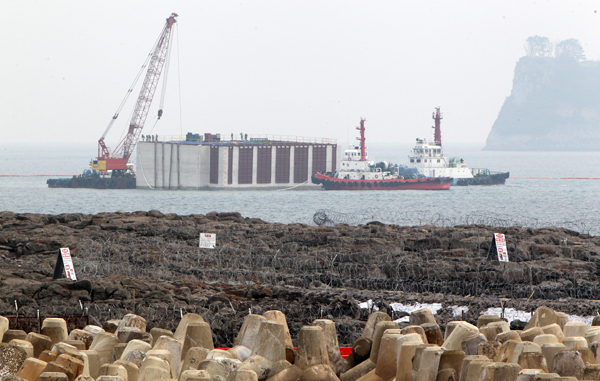 The first caisson is towed into the naval base site in Gangjeong Village on Jeju Island yesterday for underwater construction. [YONHAP]


The opposition Democratic United Party said it will scrap the long-delayed plan to build a naval base on Jeju Island if it takes control of the legislature next month and wins the presidential election in December. 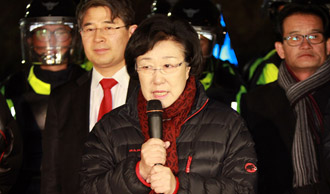 Democratic United Party Chairwoman Han Myeong-sook tells protesters Wednesday night in Gangjeong Village on Jeju Island that she will stop the naval base construction after winning elections with the liberal alliance. [NEWSIS]

“The time to judge [the Lee Myung-bak administration] is just around the corner,” said DUP Chairwoman Han Myeong-sook after she flew to Jeju late Wednesday to join protests against the construction of the base. “We can have the power after the April 11 general election.”

Chung Dong-young, a member of DUP’s Supreme Council who has been attending a sit-in rally since Wednesday, was even more forthcoming.

When he met Brigadier Jeong In-yang, who is in charge of the construction of the base, on Wednesday, he said the April 11 general election will give the opposition a majority in the National Assembly, according to a source at the scene. He also spoke of a power shift in the Blue House at the end of the year, the source said. 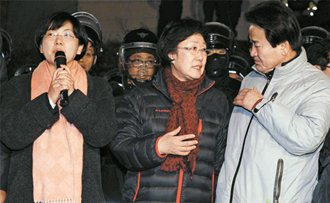 “If you are the commander, make a decision,” Chung was quoted as saying to Jeong, according to the source, pressuring him to stop construction. “We will hold you responsible.”

The construction of the naval base on about 530,000 square meters (130 acres) of land near Gangjeong Port at a cost of 977.6 billion won ($874 million) is facing resistance from a disparate group that says the base threatens the peace of Jeju Island. The government says the base is needed to boost national defenses in the South Sea.

Late last month, the Lee Myung-bak administration gave the go-ahead to the start of full-scale construction, insisting on its completion by 2015. On Wednesday, the Navy started clearing land and rocks with explosions.

Local residents have been joined by opposition politicians, liberal activists, environmentalists and religious leaders from all over Korea to oppose the base.

The ruling Saenuri Party accused the DUP of flip-flopping on the base, which it supported during the Roh Moo-hyun presidency.

The idea of a naval base in Jeju, first floated in 1993 under the Kim Young-sam administration, was adopted by the Roh Moo-hyun administration in 2007.

“It was Han Myeong-sook and Lee Hae-chan, former prime ministers, who said that it was necessary to build a naval base in Jeju for Korea to be a naval force,” Lee Joo-young, policy chief of Saenuri, told the JoongAng Ilbo by phone yesterday.

Lee Hae-chan, Han’s predecessor and premier under Roh between June 2004 and March 2006, said in 2007, “It makes no sense to oppose the construction of a military base in Jeju because it is an island of peace.” Roh’s Uri Party was the predecessor of the DUP.

“We will make sure people know that the Democratic United Party taking issue with this ahead of a general election only shows its irresponsibility,” Lee Joo-young said.

A day earlier, Saenuri interim leader Park Geun-hye, a leading presidential hopeful, said in a debate in Seoul with Moon Jae-in, a presidential aspirant from the DUP, that opposing a project President Roh pushed for the national interest makes the DUP’s political philosophy obscure.

Several Saenuri members joined the criticism of the DUP stand, including Lee Sa-churl, who called the DUP hypocrites for not speaking out about China’s alleged plan to repatriate North Korean defectors detained recently in China.

“Maybe they think stones in Jeju are precious but the lives of fellow Koreans driven to their deaths are not,” Lee said in the tweet, referring to the seaside stones the Navy has been blowing up to clear the construction site.

Meanwhile, Kim Min-seok, a former DUP Supreme Council member, said on a radio program yesterday that the chance of the party winning both the general election next month and the presidential election in December is 99 percent.