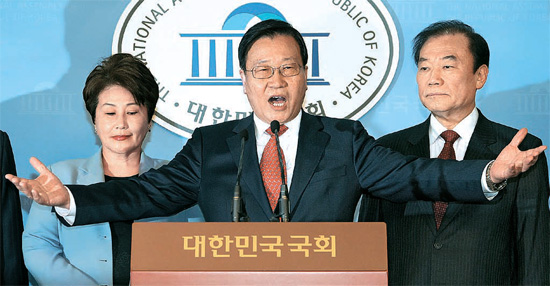 As the liberals struggled to form an alliance ahead of the April 11 legislative elections, a major schism split the conservatives as a senior member of the ruling Saenuri Party yesterday defected to a newly formed conservative party.

Railing at the ruling party for having “massacred the conservatives” with its nomination process for the April elections, Representative Chun Yu-ok yesterday announced her decision to quit the Saenuri Party. Chun said she will leave the ruling party “to defend conservative values from collapsing” and join the Korea Vision Party, a conservative centrist party recently launched by former ruling party member Park Se-il.

The 52-year-old two-term lawmaker, who once served on the party’s Supreme Council, became the third incumbent Saenuri representative to leave the party over failing to be given a nomination to run next month. Representatives Huh Cheon and Lee Yoon-sung already left the party. All three are considered Lee Myung-bak loyalists.

Chun was the first incumbent lawmaker to join the Korea Vision Party. Huh and Lee said they will run in elections as independents.

Chun said she won’t run in her current Yeongdeongpo A District, leaving open the possibility of running in another constituency for the Korea Vision Party ticket.

It remains to be seen if other Saenuri lawmakers who were not given nominations will follow Chun’s suit. Since its foundation in February, the new party has been seen as a possible vote splitter among conservative voters.

During her press conference, Chun said there is another politician who has decided to join the Korea Vision Party.

The Korea Vision Party has said it wanted to recruit as many incumbent lawmakers as possible before announcing its nominations. Sources said the party is contacting other Saenuri politicians, including its former chairman Ahn Sang-soo.

It is also seeking to join hands with Kim Dae-jung loyalists and former technocrats-turned-lawmakers of the Democratic United Party who failed to receive nominations from the liberal opposition party.

Speculations are also rising that the Korea Vision Party may try to merge with the Liberty Forward Party to become a “negotiation bloc,” a party big enough to be recognized by the National Assembly for major negotiations. As of now, it requires 20 lawmakers to become a negotiation bloc, and the LFP has 15 lawmakers.

Representative Chin Soo-hee, a key Lee Myung-bak loyalist, was ousted as the party decided to name Kim Tai-gi, economics professor of Dankook University, in her constituency in Seoul’s Seongdong A District. Asked if Chin will be allowed to run from another district, Jung Hong-won, the head of the Saenuri Party’s nomination committee, said there was no possibility.

While the conservatives faced a widening fissure, the Democratic United Party and the Unified Progressive Party yesterday continued their negotiations to form a liberal alliance. Although the two parties had agreed to complete the alliance by Thursday, they failed to meet the deadline. More talks continued yesterday, but the negotiations were deadlocked.