Loan sharks the last and only resort

Loan sharks the last and only resort 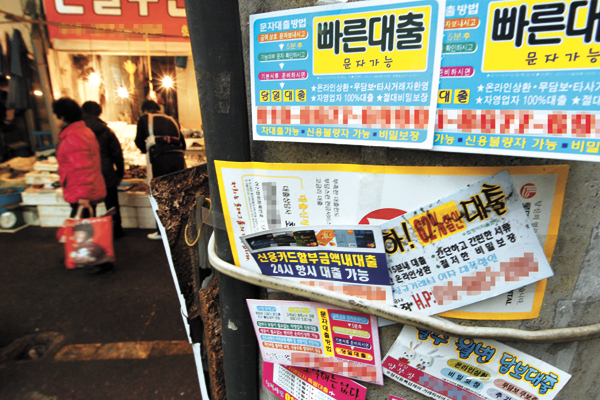 An advertisement for a private loan shark posted at Yeongcheon Market in Seoul. By Ahn Seong-sik


Low income households and small business owners are being driven to borrow money from loan sharks as financial institutions, including microcredit loans, are tightening their lending due to government pressure.

“Not even savings banks are lending loans,” said Lee Eun-mo, 60, who runs a small restaurant at Yeongcheon market in Seoul’s Seodaemun area. 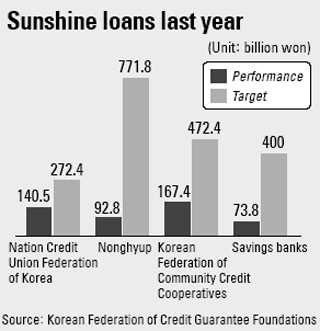 She said another restaurant in the market went out of business recently after the owner’s request for a microcredit loan - seen as the last resort - was rejected.

Another shop owner who runs an underwear shop in Ahyeon-dong said she has never seen anyone that she knew take out loans from a microcredit bank because the paperwork involved was so strict.

As household lending, including credit card spending, has accumulated to a record level of over 900 trillion won ($806 billion), the government has pressured financial institutions to tighten its lending.

This has raised the eligibility threshold for numerous loan products that were initially targeted at lower-income households or small businesses, such as the “heemang holssi” (spores of hope) loans or “sunshine loans,” which offered low interest rates.

Commercial banks near Yeongcheon market said it is now difficult for members of the public with an annual income of 20 million won and a credit rating of seven or higher to obtain such loans. Ten marks the worst credit rating.

“Even if a person with such circumstances is approved for a heemang holssi or sunshine loan, an annual interest rate of 15 percent will be applied,” said a Kookmin Bank employee.

A Nonghyup employee said that even when applying for a ‘sunshine loan,’ people usually have to wait one month to get a loan guarantee.

Last year, financial institutions set a target of 2 trillion won for sunshine loans. However, they only lent out of 20 percent of this.

“Banks are holding back from aggressively encouraging microcredit loans citing fears of insolvency and late payments,” said Lee Eui-seung of the strategic management department at the Korea Federation of Credit Guarantee Foundation.

Even banks are just filling up their quotas for the new heemang holssi loans, rather than lending to people who are in desperate need.

Last year, 16 commercial banks met their targets by each offering more than 1.3 trillion won of such loans. But they all favored people with higher credit ratings, whereas the product was initially designed for those with low credit ratings.

“As the banks have to take responsibility for loans that go sour, they only deal with clients with credit ratings between four and six [or lower],” said a bank official, who requested anonymity.

People with lower ratings are routinely denied loans by financial institutions, leading them to turn to loan sharks, who hand their business cards out freely at markets such as Yeongcheon.

“Last year, I would get roughly 10 businesses cards from private lenders a day, but this year, that number has tripled,” said a 78-year old merchant at the market.

“The interest rates on their loans are higher than 60 percent, and this grows even bigger for late payments, but many people feel they have nowhere else to turn after having the tap turned off by regular financial institutions,” he added.