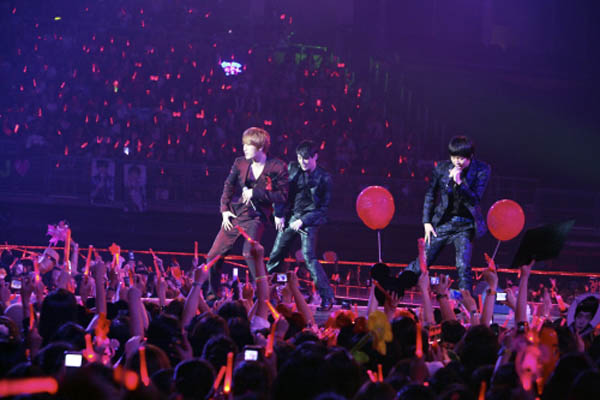 JYJ put on its first South American show ever on Friday in Chile, before taking their show to Peru on Sunday. The continent was the final destination of the band’s world tour which kicked off in April of last year.

More than 3,000 fans from all over South America, as well as from Spain and Europe, attended the Chile concert. Many had camped out days earlier in order to get the best view of the Korean boy band onstage.

In a manner that befits the continent’s people’s Latin passion, the crowd began chanting “My precious darlings” one hour before the performance kicked off.

Group leader Kim Jae-joong said that he was surprised at the large number of male fans in the audience.

In addition, many fans held up Korean signs such as “We Are With You” and “Jae-joong, I Love You.”

Throughout the concert, the fans sang along with the band in Korean, many shedding tears of joy. Three fans passed out from sheer excitement.

“I’ve waited seven years for this. I’m so happy,” one female fan told Yonhap News after the concert, while another fan said they had waited in line for four days before the event to get the best seat.

Meanwhile, the K-pop act expressed its thanks for its fans’ support, saying, “We are so happy because of you. We have been receiving all the YouTube clips you’ve sent us on our birthdays.”