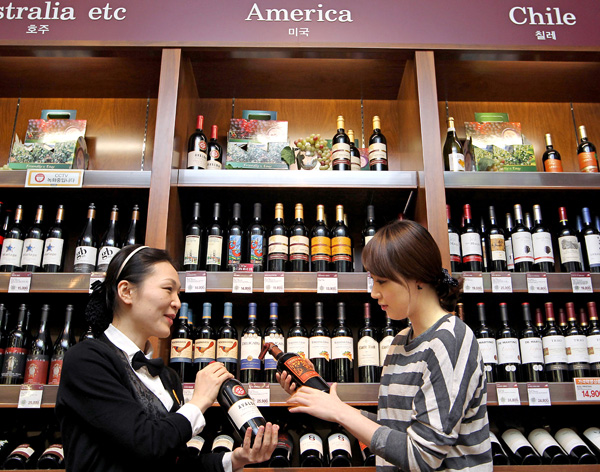 A customer looks at a bottle of U.S. wine at E-Mart’s Cheonggye branch in northern Seoul yesterday. The retailer has put U.S. wines on a special sale to mark the Korea-U.S. FTA, which will be implemented at midnight. [YONHAP]


At midnight, Korea will become the only Asian country to have implemented free trade agreements with the world’s two largest markets.

The pending Korea-U.S. FTA comes into effect almost nine months after Seoul implemented a similar deal with the 27-member European Union on July 1. With it, tariffs on a whopping 82.1 percent of goods imported from the U.S. will be immediately removed, while fractionally fewer, or 80.5 percent, of the products that Korea ships to the U.S. will have their tariffs waived. 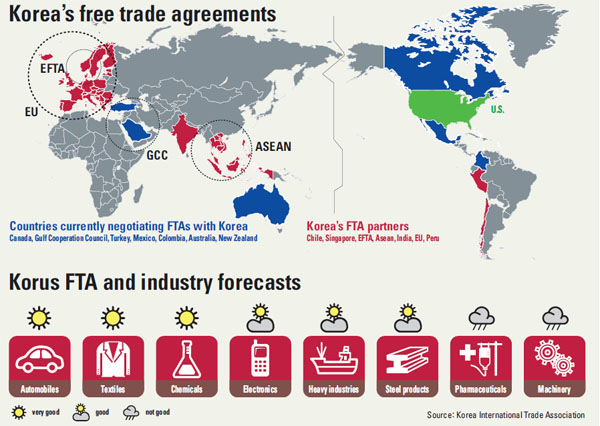 This will make the lion’s share of Korean goods in the U.S. significantly more price competitive, helping Korean businesses increase their share of the market there. At the same time, cheaper U.S. products are expected to help tame runaway inflation in Korea, which the government has been struggling to put a lid on. 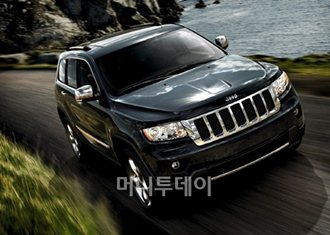 Domestic wine importers are already on track to cut consumer prices of U.S. wines. The country’s biggest wine importer, Keumyang International, said it will cut its supply prices of 42 U.S. wines by 10 percent on average from tomorrow.

This is possible as the trade pact lifts a 15 percent tariff on U.S. wines. Considering the commission fees incurred during Korea’s convoluted distribution process, shoppers will be able to enjoy their favorite vintages at prices 7 percent lower than before.

Some U.S. agricultural and commercial goods will also be available at lower prices.

However, supplier and retailers have not yet disclosed just how much of these reductions will be passed on to individual consumers.

Tariffs on U.S.-manufactured automobiles will drop from 8 to 4 percent as soon as the FTA comes into force, with all of the tariffs to disappear after five years. Taxes to be paid by owners of U.S. vehicles will also be revised downward.

For example, individual consumption tax rates for U.S. cars with engine displacements of 2 liters or higher will be cut from 10 percent to 8 percent tomorrow, and further scaled back to 7 percent next year, 6 percent in 2014 and 5 percent in 2015.

The Korean auto parts industry is likely to reap the largest benefits from the Korus deal as tariffs of 2.5 percent to 4 percent on parts will be lifted immediately. Local auto part makers expect to see their exports to U.S. automakers such as General Motors, Chrysler and Ford rise.

“We recently started contacting the big three automakers in the U.S. to see whether they are interested in increasing their orders and they expressed interest,” said an official at a small auto parts company.

Hyundai Mobis, another parts maker, has set up a task force to expand its channels into the U.S. market, it said.

However, the local agricultural and fishery sectors look unlikely to escape unscathed from the changes that the trade deal promises.

To soften the blow, Seoul plans to provide about 4 trillion won in compensation for farmers, including subsidies, over a five-year period ending in 2016. This is based on its calculation that, overall, the country will earn an extra 6 trillion won each year from the Korus FTA compared to the years leading up to its implementation, a senior government official said.

The textile industry will be another beneficiary of the pact. According to a survey by the Korea Trade Promotion Agency, 79.4 percent of 102 U.S. buyers who attended a Korea textiles fair in New York last month said they will increase imports from Korea when tariffs are eliminated.

Because tariffs on local textile products are relatively high, ranging from 8 percent to 17.2 percent, as well as the fact that the tariffs are scheduled to be lifted relatively quickly, the industry will significantly benefit from the deal, the Korea International Trade Association (KITA) said.

It has taken five years and eight months to effect the FTA since negotiations were first launched in June 2006 under the previous administration.

At a press conference yesterday, new KITA Chairman Han Duk-soo said the Korus FTA reminds him of the FTA with Chile, which he spearheaded as a former trade minister in 1998.

“It was so unfortunate to see the Korus FTA remains in limbo for over four years,” he said. “[Especially as] it is a means to boost our exports, attract more foreign investment and contribute to national growth.”

Han acknowledged that the road forward may not always be smooth, “but we should not take a defeatist attitude; we need to take strength from the way Korea has developed [so rapidly],” he said.

According to a recent report by the Ministry of Strategy and Finance, the FTA with the U.S. will not only increase the nation’s gross domestic product by 5.66 percent, but also create jobs for 350,000 people. Furthermore, it is expected to ramp up exports to the U.S. by nearly $1.3 billion on average every year, with manufacturing production, as a result, growing by 8.8 trillion won ($7.8 billion) on average.

The report predicted Korea will see its trade surplus with the U.S. increase by $140 million annually over the next 15 years.