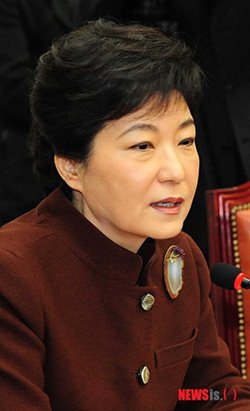 Park Geun-hye, the interim head of the ruling Saenuri Party and a daughter of former President Park Chung Hee, yesterday issued a rare apology to the Koreans who had suffered from her father’s authoritarian rule of the country.

“I have always felt sorry for the people who suffered unintentionally during the process of industrialization,” Park said yesterday at a debate hosted in Busan by nine regional broadcasters. “I apologize to those people.”

Park Chung Hee seized power through a military coup in 1961 and ruled Korea until his assassination in 1979. While largely credited as a key catalyst of the country’s industrialization and economic growth, he is often criticized for his dictatorial rule.

While many conservatives nostalgic of the Park Chung Hee-era often support his daughter’s political ambition to become the next president, the liberals have denounced her as the daughter of a dictator.

In reply, Moon shot back at her for not apologizing for her father’s political deeds. “She has never admitted that it was wrong for her father to have infringed upon democracy and human rights,” Moon said March 7. “I wonder if she has a firm belief in democracy.”

In the past, she had made public her apologies for her father’s authoritarian rule. In 2004, she visited then-President Kim Dae-jung and offered an apology for his suffering during her father’s rule.

When she declared her bid for the presidential primary in June 2007, she also offered an apology. “I have always felt sorry for the people who suffered and were forced to make sacrifices over unfortunate incidents of my father’s era,” Park said at the time.

After offering another apology yesterday, Park said she wanted to hold hands with the victims of her father’s authoritarian rule and join their forces together for the country.

She also stressed the importance of “reconciliation and unity of the two forces that led the country’s industrialization and democratization” as the spirit of the time.

Her apology appeared to show her determination to solidify her political aspirations by leading the conservative ruling party to victory in the legislative elections and using it as a stepping stone for her presidential bid.

She also tried to mend the fissure inside the Saenuri Party over the nomination outcomes.

She said the politicians who failed to win nominations are still important assets of the party and the party will do its best to allow them to work for the country.

They claimed that they were dropped because of their associations with the president in the nomination process influenced by Park and her allies.

Dating back to the presidential primary in 2007, the rivalry between pro-Lee and pro-Park factions has run deep for years.

However, it appeared that President Lee has decided to support Park’s political ambitions to bring another presidential victory to the conservative ruling party.

On Monday, he issued rare praise for Park before senior news editors, while refraining from criticizing her for ousting his allies.

“The entire nation knows very well that she is a very talented politician,” Lee said at the forum hosted by the Korea News Editors’ Association on Monday. “She is a promising politician. I don’t think there are many politicians in Korea to match her.”

While dismissing that she has her limits, Lee also said he thinks she is called the presidential frontrunner based on the public opinion.

In a reflection of the president’s remarks, a key ally of Lee said yesterday he acquiesced to the Saenuri Party’s decision to disqualify him from the nomination. Other Lee loyalists also increasingly kept a low profile instead of resisting the party’s decision to oust them.

“I have decided to give up running in the April legislative elections,” Lee Dong-kwan, former Blue House spokesman, said yesterday, adding that he did not want to split conservative votes and benefit the opposition party. The 54-year-old former journalist who served as the spokesman of the Blue House from February 2008 until July 2010 applied to represent the Saenuri Party in Jongno District, central Seoul, but the party nominated Hong Sa-duk, a six-term lawmaker and key Park Geun-hye loyalist.

“For the next 11 months, I will do everything to support the Lee administration’s successful conclusion and the ruling party’s victory in the presidential election,” he said.

The opposition Democratic United Party yesterday reacted sensitively to the president’s praise for Park, criticizing the president for trying to influence elections. Lee’s remark to support Park only a month before the election is an intervention in the elections in violation of the law, said Kim Hyun, spokeswoman of the Democratic United Party. Kim also condemned Park for making a fake apology and making a fool of the people.

“She should have apologized for the people who suffered from Park Chung Hee’s military dictatorship,” Kim said.