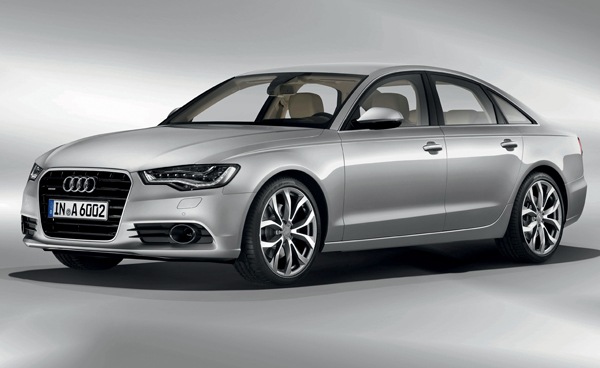 Car of the Year Audi A6

Audi’s A6 is set to officially claim its crown today at the 2012 JoongAng Ilbo Car of the Year awards, which takes place from 11 a.m. at the Millennium Seoul Hilton Hotel in central Seoul.

The luxury midsize sedan, which can race from 0-100 kilometers (62 miles) an hour in just 5.8 seconds, was named the best car Korean consumers can buy for the money by a panel of veteran judges last week.

BMW’s X3 was chosen as the SUV of the Year, and the Lexus CT200h hybrid hatchback was given the technology award. Peugeot’s 308 sedan took the prize for being the year’s most environmentally friendly car, while the Audi A7, a four-door luxury coupe, was considered to have the best performance. 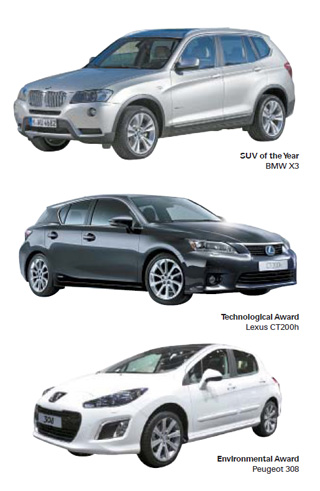 Audi is known for reducing cars’ weight by using aluminum alloys and the seventh-generation A6, which was released last August, is no exception. The automaker claims to have shaved 135 kilograms (300 pounds) off its weight as part of the first full model change since 2004.

The car’s powerful 3-liter engine can produce 310 horsepower, while its advanced multimedia system displays information on the front windshield.

The Ray, which is driving the country’s city car market, scored highly for its design and price competitiveness. When it was launched last December, 4,107 units were sold in Korea, leading some industry observers to claim that it is not just leading the segment but creating an entirely new one. Monthly sales jumped to 4,496 in January and 5,639 in February.

The car is equipped with a 1.0-liter gasoline engine that can produce 78 horsepower and gives 17 kilometers (10.6 miles) to the liter. It has a sliding door on the passenger’s side and the rear seats can be folded down to create a generous amount of storage space.

Although it is a city car, it has features that are normally seen in midsize vehicles, such as a heated steering wheel and six air bags. Its small engine also gives owners a range of benefits, including acquisition tax exemptions and discounts on expressway toll fees and public parking.

Hyundai’s i40 was designed and developed at the carmaker’s European R&D headquarters in Russelsheim, Germany. It is made strictly for the European market, where station wagons are popular, and seems to have a much stronger European than Korean identity.

It comes equipped with two types of engines: a 2.0-liter direct injection that delivers 178 horsepower, and a 1.6-liter diesel that offers 140 horsepower. According to Hyundai, the i40 uses an identical power train to its Sonata midsize sedan but it is more fuel efficient than other midsized cars, yielding 13.1 kilometers to the liter. It sports a modern, innovative-looking exterior, with a hexagonal front grille and curving lines augmenting the effect.

BMW’s X3 ranks as its most popular SUV in Korea. The new version is 8.3 centimeters (3.3 inches) longer and 2.8 centimeters wider than the first-generation model, but 1.3 centimeters shorter in height. Curving lines on both flanks and larger headlights lend it a visually dynamic appeal.

The X3’s start-and-stop function allows it to save on fuel costs by powering down at traffic lights, while its “efficient dynamics” mechanism - which combines this with more conservation-minded braking and steering - boosts the vehicle’s fuel efficiency to 17.2 kilometers per liter. Surprisingly agile for its size, the X3 can get to 100 kilometers per hour in 8.5 seconds.

Meanwhile, the A7 coupe, which clinched the performance award, is equipped with a supercharged direct injection engine that can produce 310 horsepower and 44.9 kilogram-meters of torque. It would leave the X3 choking on its exhaust fumes as it races to 100 kilometers per hour in just 5.8 seconds.

The A7 is also available as a 3-liter diesel with a TDI Turbo direct injection engine that can produce 245 horsepower and 51 kilogram-meters of torque. Like other Audi models, it is made of lighter aluminum alloy.

The A7 is one of but a few all-wheel drive coupes available on the market. It is also equipped with a heads-up display and Korean-language touch-screen navigation.

Separately, Lexus’ decade-long development of full hybrid technologies seems to have started to pay off in the form of the CT200h, which was given the technology award.

It is equipped with a 1.8-liter gasoline engine and high-performance nickel-metal hybrid battery. The engine can produce 136 horsepower while leaving little in the way of a carbon footprint. In fact, when in electric mode, the car does not discharge any pollutants at all up to a speed of 45 kilometers per hour. The CT200h offers fuel efficiency of 25.4 kilometer per liter.

The Peugeot 308, which was given the environmental award, has improved its fuel economy by reducing the amount of air resistance through its aerodynamic design and shedding 25 kilograms.

Its third-generation start-and-stop function enhances fuel efficiency by 15 percent and reduces 5 grams per kilometer of carbon dioxide emission, according to the carmaker. This effectively gives the driver 22.6 kilometers per liter - equal to what one would expect from a hybrid.

Sixteen experienced judges were involved in the evaluation process. They assessed 53 cars from 22 brands and selected 15 final candidates during the first round of evaluation that ended on Feb. 3.

The design award was dished out early to Mercedes-Benz’s CLS four-door coupe and the Cube.


* The JoongAng Ilbo Car of the Year awards continues to evolve each year as an objective arbiter of the best models to appear on the market.

This year, the judges evaluated 53 cars from 22 brands and selected 15 final candidates during the first round of evaluation that ended early last month. The judges say automakers’

technologies are developing so quickly that it is becoming increasingly difficult to select the best vehicle.