Works seized from bank scandal go on the block

Works seized from bank scandal go on the block 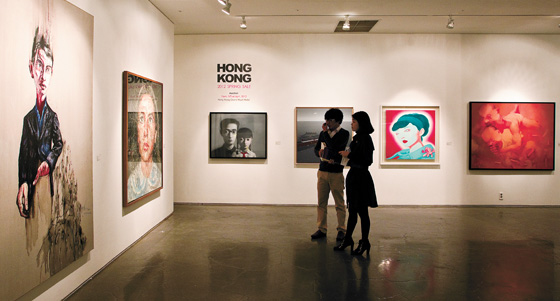 Visitors to the Gangnam branch of Seoul Auction look at works by Chinese artists that will be put up for sale in Hong Kong on April 3. By Cho Yong-chul


Last May, the Seoul Central Prosecutors’ Office in Seocho, southern Seoul, revealed the contents of 42 seized apple boxes. The boxes contained approximately 950 ancient books and 18 treasures, including two volumes of “Wolinseokbo,” a collection of Buddhist sutras designated as Treasure Nos. 743-5. 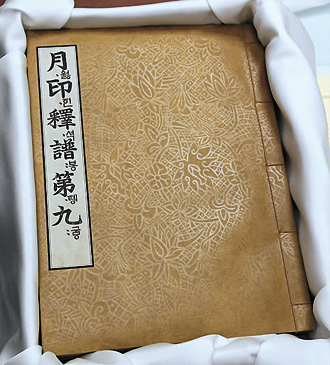 A volume from “Wolinseokbo,” a collection of Buddhist sutras.

The antiques were owned by Kim Min-young, the CEO of Busan Savings Bank, formerly the nation’s largest savings bank. The bank is at the center of a massive influence-peddling scandal involving bank officials, state auditors and politicians; it went bankrupt for bad loans amounting to 9 trillion won ($8 billion).

Kim is known to be an avid art collector with a particular interest in Korean history and Buddhist civilization. While at the bank, he held a special exhibition at Dongguk University in 2007 with 161 ancient books from his collection. It was known that he had approximately 2,000 antiques in his collection at that time.

Many of the works from his collection, as well as other works seized by prosecutors, will now be sold by Seoul Auction at auctions scheduled to start later this month and continue through the end of the year.

The works are now on display at Seoul Auction’s Gangnam branch in southern Seoul.

All of the works seized by prosecutors are now owned by the Korea Deposit Insurance Corporation. The money raised from the sale of the paintings will go toward repaying customers and junior creditors who fell victim to the savings bank scandal.

The first auction will be held on March 20 in Seoul.

Of the 124 paintings sold at this auction, four were seized from the Busan Savings Bank Group, including the sculpture “Stone Book,” by Ko Young-hoon. Ko is a representative Korean painter from Jeju whose work commanded the highest price at a Sotheby’s auction in New York in 2007. The reserve price, or the minimum price for property sold at auction, for this piece is set at 68 million won.

The other three paintings include “Blossom” by Jeon Byeongheon, “Reality+Image 307-413” by Kim Kang-yong and “Landscape” by Oh Chi-gyun, and are priced at 14 million, 20 million and 35 million won, respectively.

A second auction will be held in Hong Kong on April 3.

One of these is a painting from Zhang Xiaogang’s “Bloodline” series. The reserve price for this piece is set at 700 million won. The painting was acquired for 1.4 billion won, according to prosecutors.

Zhang Xiaogang, born in 1968, is a representative Chinese modern artist who drew attention with his “Bloodline” series, which depicts the erosion of the traditional family due to the modernization of China after the Cultural Revolution. When Zhang held his first exhibition in Korea in 2006, all of his paintings sold out before the exhibit opened.

The auction will also include “Essence of Violence,” by Yang Shaobin, part of the first generation of Chinese artists, and Yin Zhaoyang’s “Tiananmen Square.” The works are priced at 70 million won and 78 million won, respectively.

Also to be sold is new artist Feng Zhengjie’s “Chinese Portrait,” which has a list price of 30 million won, and Julian Schnabel’s “Untitled,” listed at 95 million won.

When prosecutors revealed the array of works seized from the Busan Savings Bank, what drew the most attention was two volumes of a collection of Buddhist sutras called “Wolinseokbo.”

King Sejo is notorious in the annals of Korean history for sentencing his son to death by starvation in a locked box. It is said that King Sejo had “Wolinseokbo” created to pay tribute to the memory of his son.

“Wolinseokbo” is considered the first Korean Buddhist book and was printed using woodblocks. It shows Buddhist civilization during the early Joseon Dynasty and the progression of the Korean language.

It is estimated that “Wolinseokbo” consists of 25 volumes, 19 of which have been found, including volume Nos. 9 and 10.

The story of how the prosecution attained “Wolinseokbo” is a complicated one.

At the beginning of March 2011, the Seoul Central Prosecutors’ Office seized several paintings owned by the Busan Savings Bank Group. Prosecutors suspect the works were purchased using money from the now-bankrupt financial institution.

As the prosecution expanded the investigation, they uncovered a suspicious deal between Kim and a businessman surnamed Shim.

After the prosecution interrogated Kim, it was revealed that he sold 18 Treasures to Shim - including Wolinseokbo and Gyeongguk Daejeon, the code of laws used from the Goryeo Dynasty to the Joseon Dynasty - for 1 billion won.

When the investigative team recovered the artifacts, Kim relinquished his ownership of the goods, according to Lee Geum-ro, who is the head of the team investigating the case at the Supreme Prosecutors’ Office.

“He said that the money should be used to compensate the victims of the Busan Savings Bank scandal,” Lee said.

First, Kim can still assert his ownership of the treasures while their value is being assessed by an appraisal service.

If he doesn’t, it will make the works easier to sell, but there remains the sticky matter of how the works can be sold.

By law, cultural assets with Treasure status cannot be sold outside of the country.

The works could be sold through a limited domestic auction that would be open to government organizations such as the National Museum.

However, if a domestic auction is allowed, it is likely to be controversial because the items are designated cultural Treasures.

“The method of sale will be determined by the item’s status as a Treasure,” Um Tae-sik, the head of the KDIC Special Asset Management and Recovery Department, said. “But we will also consider the aim of saving the bank’s depositors.”

Another one of the works seized from Kim’s collection is “Children Jumping Rope,” by iconic modern Korean artist Park Soo-keun.

The work, valued at 1.2 billion won, is believed to have been created in the 1960s and was first revealed to the public in 2007. The auction for this painting will be held in April, though the date has not yet been confirmed.