U.S. wines likely to climb to No. 3 spot

U.S. wines likely to climb to No. 3 spot 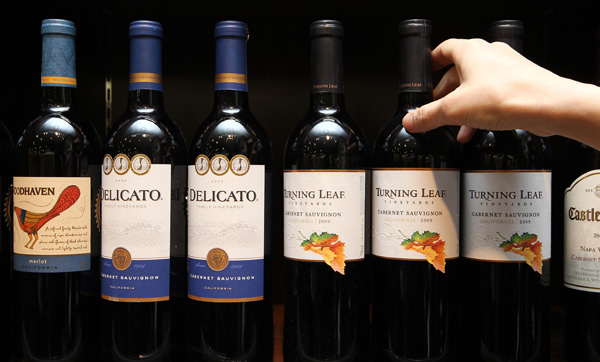 America will replace Italy as No. 3 in the market for imported wines for the first time following the implementation of yesterday’s Korea-U.S. free trade agreement, which pushed down prices here by immediately removing a 15 percent tariff, industry observers predict.

According to Shindong wine and other importers, MacMurray Ranch Pinot Noir, which is popular among Koreans, dropped 20,000 won to 140,000 won, and Robert Mondavi Cabernet Sauvignon shed 9,000 won to 69,000 won at local wine shops and department stores.

Many wines selling for around 10,000 won offered discounts of around 10 percent, with Carlo Rossi Red Sangria dropping to 8,900 won from 9,900 won.

The change is unlikely to have much impact on French wines, which seem to have an unshakable grip on the top spot, at least for the immediate future. And Chile looks safe at No. 2 given the formidable reputation its wines have built up among consumers here and their affordable prices.

But Italian wines are shaping up as the next casualty of the country’s wine wars, according to major retailer Lotte Department Store.

“Italian wines are very popular here because they are cheap and sweet-tasting, especially the Moscatos. But they lack variety,” said Kim Geun-soo, a spokesman at Lotte. “As most wines from the country compete in the same price range as those from the U.S., which just got even cheaper, we expect them to suffer.”

The three most popular foreign wine-making countries in Korea have until now shared most of the spoils of the domestic market, carving out a combined 81 percent chunk last year, according to the Korea Wine & Spirits Importers Association. In contrast, U.S. wines made up a not inconsequential but hardly dominant 9.3 percent

“After discussing market trends with various wine experts and wine importers, we estimate that sales of U.S. wines in the first half of this year will double to 3.6 billion won ($3.2 million) and replace Italy as the third most popular country,” said Kim at Lotte.

“Sales of Italian wine will plummet to 3.2 billion won in the first half, down 24 percent from the previous year’s 4.2 billion won.”

Lotte forecast that French and Chilean wine will continue to maintain the top two spots with sales of 7.4 billion won and 6.1 billion won, respectively, in the first half.

Market watchers noted that U.S. wines have been increasingly gaining attention from local wine aficionados, even prior to the implementation of the Korus FTA, with sales at Lotte rising 18 percent from January to February compared to the same period last year. Growth outpaced the 7 percent rise in total wines sales at the store.

Meanwhile, feeling threatened by the aggressive marketing tactics of U.S. wine distributors, importers started lowering the prices of Chilean wines by an average of 10 percent from March 1 to keep customers interested.

Nara Cellar is now offering Montes Alpha to retailers at a 10 percent discount, while Lotte Chilsung Beverage has lowered the price of its Carmen Tolten Cabernet Sauvignon by 15 percent.

Family Mart, the nation’s No. 1 convenience store, went even further by cutting 16.7 percent on average off the cost of its Chilean, Australian and European wines from March 8.

“Demand for low-alcohol drinks like cocktails, sake and wine is booming among people in their 20s and 30s, who now often stop by convenience stores to grab a bottle of wine,” said Lee Jae-seon, a merchandiser at Family Mart.

“Some 38 percent of our wine sales occur at lunch time and between 6 p.m. and 8 p.m., when people are heading home from the office.”

Market watchers expect wine consumption to continue to grow. According to the Korea Customs Service, $135 million worth of wine was imported last year, marking a nearly sevenfold increase from 2000.

“It’s a global trend that new world wines from countries such as the U.S., Chile and Australia are steadily eating in the shares of old world wines made in Europe,” said an official at the Korea Wines & Spirits Importers Association.

“We estimate that American, French and Chilean wines will be waging a fierce war here this year, and only time will tell whether Italian wine, which is rather weak in terms of its marketing strategies, will be able to fight back.”