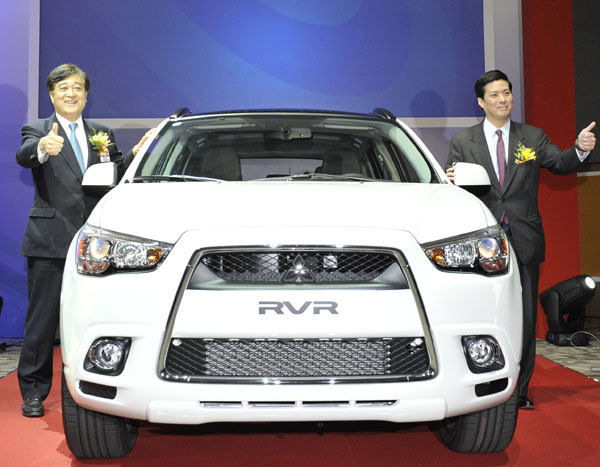 
Mitsubishi Motors is finally returning to the Korean market. The Japanese carmaker said yesterday it signed a partnership with CXC Motors to distribute its vehicles in the country.

Mitsubishi also unveiled its RVR small crossover vehicle at the Kintex center in Goyang, Gyeonggi, for the first time.

“Korea is a fast-growing market, and I believe it will be a good opportunity for us,” Mitsubishi President Osamu Masuko told the press. “There is a lot of competition, but if we continue to introduce a series of high-quality products and set up a strong repair services network, I believe we can succeed.

“Korea is a strategic market through which we are going to raise our brand’s recognition in Asia,” he said.

Cho Hyun-ho, chairman of CXC, the official distributor of the Mitsubishi brand, said the company wants to become the most recognized and best-selling foreign brand in Korea, as well as the automaker that delivers the highest level of customer satisfaction.

Cho is one of the grandsons of late Hanjin Group founder Cho Joong-hoon. Hanjin Group is the country’s joint-leading transportation group, along with Korean Air.

“In the near term, we will launch Mitsubishi’s electric cars, such as the i-MiEV and SUV-PHV, a plug-in hybrid, in the Korean market,” Cho said.

CXC has opened two dealerships in Seoul. It aims to sell 900 vehicles this year.