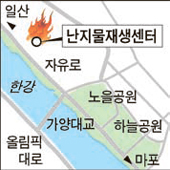 One worker was killed and four others injured in a gas explosion at a waste recycling center in Goyang, Gyeonggi, yesterday, fire officials said.

The five were doing welding work while cutting gas pipes to dismantle an unused generator when the explosion occurred, shattering all the windows in the building and destroying 400 square meters (4,300 square feet) of the outer wall, the officials said.

The body of the deceased worker, aged 52 and identified only by his last name Jeon, was found in the rubble of the wall.

Fire officials said they suspect the explosion occurred after a spark came into contact with gas leaking from a valve that was accidentally opened.

Police said they will determine the exact cause through a joint investigation with forensic experts, fire officials and gas experts.