Surge in oil prices to make dent in local economy

Surge in oil prices to make dent in local economy 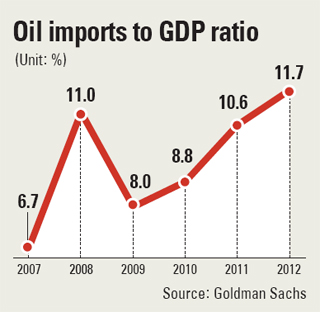 A recent surge in international crude prices and their high volatility are likely to make a dent in the economy of Korea, a nation that relies entirely on imports for its oil needs, market sources said yesterday.

With oil prices soaring due to heightened geopolitical risks stemming from the international standoff over Iran’s nuclear program, the ratio of Korea’s oil imports bill to its gross domestic product is expected to hit a record high this year, having an immense negative impact on Asia’s fourth-largest economy and its stock market, they said.

According to the Korea Center for International Finance (KCIF) and global investment banks, Korea’s oil import bill is predicted to reach 11.7 percent of its GDP, up from last year’s 10.6 percent and 11 percent in 2008, when a global financial crisis erupted.

“An excessive ratio of oil bills to GDP could atrophy spending in other sectors, having an adverse impact on the overall economy,” said Oh Jeong-seok, a KCIF researcher.

“Increased volatility in the oil market makes it hard to forecast oil prices, a negative factor for corporate managers and stock prices.”

The annual increase in Korea’s consumer inflation slowed down in February, but consumer prices gathered steam, compared with the previous month.

The country’s consumer price index rose 3.1 percent in February from a year earlier, slowing from a 3.4 percent gain in January. The index, however, gained 0.4 percent compared to a month ago.

International investment banks also expressed concern that a continued uptrend in oil prices could affect the Korean economy and its stock market negatively.

Nomura of Japan said Korea is hit harder by high international crude prices since the ratio of its oil import bill to GDP is greater than other countries.

Top managers of Korean companies predict high international oil prices to last for the time being due to the standoff between Western countries and Iran, a poll showed yesterday.

According to the survey of 216 local chief executive officers by the Samsung Economic Research Institute, 44.4 percent of the respondents expected international crude prices to average $100 to $120 per barrel this year.

On Friday, benchmark Brent oil settled at $125.81 a barrel in London trading, up $3.21 form the previous day. It was the market’s biggest one-day gain since March 1. According to the findings, 42.4 percent of those surveyed cited the international conflict over Iran’s nuclear program as the major reason for the oil price rise. To tackle high oil prices, 63.4 percent of the respondents urged the government to increase its spending on the development of renewable energy and energy-saving technologies.

Soaring oil prices have been a constant bugbear to Korea, the world’s fifth-largest crude buyer that depends entirely on imports for its oil needs.