Welfare critical for ‘jump to next level’: Chang

Welfare critical for ‘jump to next level’: Chang 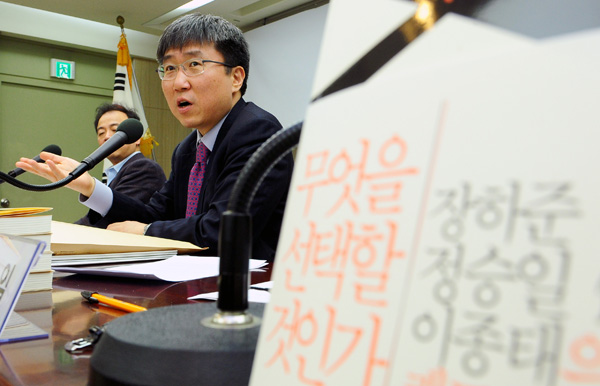 Ha-joon Chang speaks during a press conference to promote his new book “What Will We Choose?” in central Seoul yesterday. [NEWSIS]


Ha-Joon Chang, an influential development economist and best-selling author, called for a complete reassessment of taxation, corporate policies and financial regulations in Korea to move toward an economic model of a “productive welfare state” seen in northern European countries.

Chang criticized what he called the “neoliberal” bent of Korea’s economic policies since the 1997 Asian financial crisis as creating the societal polarization and discontent that has fueled the slew of so-called “populist” political pledges during this election year, and advocated building a universal welfare system over decades in place of current campaign pledges with an expiration date lasting a single presidential term.

In a press conference to mark the publication of his new book titled “What Will We Choose?” in Korean (the book is currently without an official English title) in Gwanghwamun, central Seoul, Chang rejected the political sphere’s recent tendency for equating “conglomerate bashing” with welfare.

“Welfare might mean taking from the rich and giving to the poor under the selective welfare system in the U.S., but in the universal welfare system of Europe, welfare means group purchasing,” Chang said.

“In Britain, health care costs are low because the government buys medicine in bulk. This is why it’s a misconception to think that taxes are a burden; it should be thought of as money we pool for group purchasing, to get a large discount.”

This would mean that the entire public would have to pay more taxes, but Chang argued the benefits would outweigh the drawbacks.

“For example, in the U.S., there is no universal health care - which makes restructuring companies very difficult, as losing a job means losing one’s health care, and the labor unions resist [restructuring efforts] to death.

“However, in Sweden, a person receives 70 to 80 percent of his or her pay when losing their job. They can receive retraining for a new job, and if a person needs to move to a new neighborhood for a job, the government lends money for the move at low interest. In this way, welfare is interlinked with economic production.

“Such [universal welfare] wasn’t necessary during the 1960s and 1970s. But as [Korea’s] industrial structure matures, production and welfare must be interlinked in order for us to jump to the next level.”

Meanwhile, Chang, who had been a staunch opponent of Korea’s enacted free trade pacts with the U.S. and the EU, said that the welfare system is needed to “minimize the damage.”

“In five to 10 years, when people lose jobs in fields where [Korea] lacks competitiveness - agriculture, services, pharmaceuticals - we need the structure in place so they can at least retrain and work in something else,” he said.

Chang also called for stronger regulations in the capital market. “Many of the problems viewed as the fault of the chaebol are actually issues emanating from the open financial market and excessive skewing toward the interest of the shareholders,” Chang said.

The new book, of which an English translation is not planned yet, is written as a conversation between Chang and two other co-authors.

In addition to teaching economics at Cambridge University since 1990, Chang has written the best-selling “Bad Samaritans: The Myth of Free Trade and the Secret History of Capitalism” (2008) and “23 Things They Don’t Tell You About Capitalism” (2010).