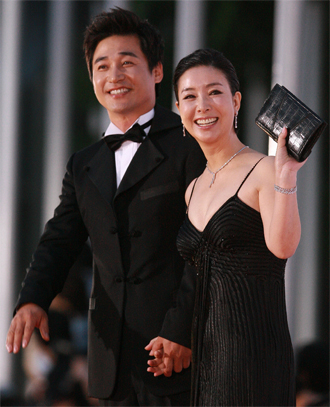 Jun’s agency told enews24.net yesterday that the two divorced last month. According to Jun’s agency, the split was amicable.

“Jun said the divorce was entirely his fault and that the two still remain in contact,” the representative said.

The couple met on the set of MBC drama “Saint and a Witch” in 2003 and married in June of the same year. The wedding caused quite a scandal in the industry, as Jun is nine years younger than his wife.

The marriage is thought to have begun to crumble in 2008 when the two started a makgeolli (rice beer) business called Family’s Glory after a drama of the same name in which Jun had starred. The business eventually went under, and the resulting financial strain is believed to have been a source of trouble between the couple, eventually leading to their divorce.

Kim and Jun have three children. The arrangements for custody of the children are not yet known.