Jo Kwon opens up about past pains

Jo Kwon opens up about past pains 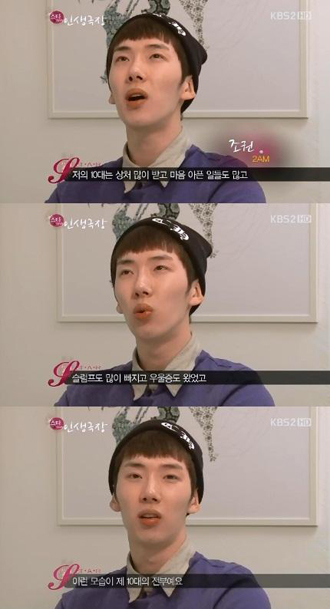 Jo Kwon, leader of boy band 2AM, showed a more serious side to his cheerful personality when he spoke about growing up under difficult conditions on the KBS 2TV show “Star Life Theater” on Monday.

In the episode dedicated to 2AM, the 22-year-old entertainer revealed that his family went through a tough time when he was in his teens.

“Looking back on my teenage years, all I remember are hurts, slump after another and depression,” said Jo.

The boy band member, best known for his comedic and witty disposition, said that despite the fact that viewers think he must have been spoilt, his family was always strapped for cash. He said that he had about 5,000 won ($4.45) to spend on food and transport each day.

He said that he would cry in the corner watching his mom and dad being roughhoused by debtors.

Jo broke down on the show as he reminisced about one time trying to steal some money from his parents and finding just 10,000 won in their pockets.

The singer’s mother also appeared on the program and said that she always felt bad that she wasn’t able to buy all the food that Jo wanted while he was training to become a singer. Previously, Jo had revealed that most of his childhood was spent training for his debut with JYP Entertainment.