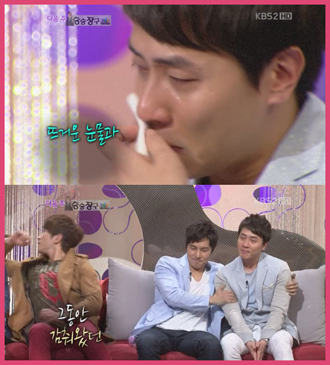 Andy, of Shinhwa fame, has revealed that he didn’t always have a comfortable life, even as he performed in Korea with his fellow band members in the 1990s.

His mother’s health declined during that time, causing great financial strain, the singer revealed on the second-part of a KBS special on Shinhwa that aired March 20.

“My mother got sick during the band’s fourth album release, and I had to go back to the States,” said Andy, who is American. “When I came back to Korea to make some money for her treatment, I had to live alone at a gosiwon.”

Gosiwon are small, one-room apartments designed for students who are studying for exams.

Andy particularly lamented that his style had to suffer during that time.

“I had no money to get a haircut so I had long hair and I avoided people,” he said. “Every night, I had a bottle of soju and aspirin in order to fall asleep.”

After the program, netizens, usually quick to voice strong opinions, seemed to be puzzled by the revelation. “Why didn’t his fellow band members help him out?” several asked.

In the same episode, another member, Jun Jin, opened up about his depression and panic disorder.