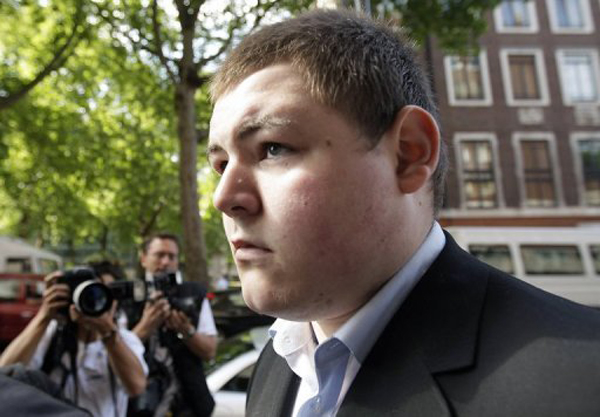 
LONDON - A London court on Tuesday sentenced a star of the Harry Potter films to two years in prison after he earlier admitted to taking part in last year’s London riots.

Jamie Waylett, 22, who played school bully Vincent Crabbe in six of the films, was found guilty of violent disorder by a jury at London’s Wood Green Crown Court after earlier admitting to stealing a bottle of champagne from a supermarket.

The actor, from Hampstead in north London, was part of a mob of youths who joined in as the riots swept through Chalk Farm in north London on Aug. 8 last year.

Waylett, who already has a previous conviction for cannabis possession, was cleared of intending to destroy or damage property with a petrol bomb he was seen to be holding.

“A considerable amount has been said about what happened over those few days,” said Judge Simon Carr.

“Anyone watching the footage in this case can only imagine the mayhem that took place on the streets.

“You chose to go out on to the streets on what was the third day of the violence,” he added.

Waylett’s lawyer Emily Dummatt said the pressures of being a young star had turned her client into a “withered actor by the age of 22”.

“Although he had the good fortune to be in the Harry Potter films, it turned out to be not such good fortune,” she said.