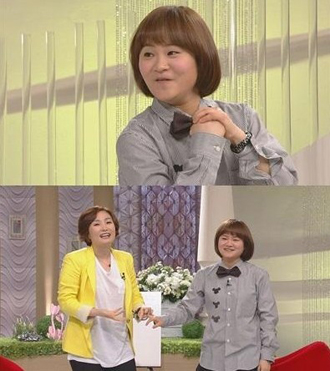 Comedian Kim Shin-young had audiences gasping when she revealed a slimmer self on a recording of JTBC’s morning show “Park Kyeong-rim’s Oh! Happy Day.”

The entertainer, best known for her plump, comedic appearance, said she lost a total of 15 kilograms in just five months and currently weighs somewhere around 40 kilograms.

On the benefits of weight loss, Kim said, “Previously, I used to be easily irritated and tired after two hours with anyone. Now I’m full of energy.”

Kim also introduced her personal trainer through a video recording and revealed some diet tips.

“I bought a bikini with a character’s face on it. My motivation was to help the character return to his normal face instead of being stretched out on my body,” joked the 28-year-old entertainer.