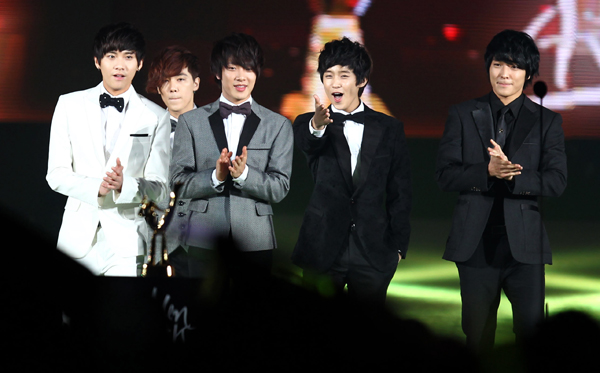 
FT Island held a fan meeting in Japan on Monday and Tuesday titled “Congratulations!” in celebration of Lee Hong-gi’s and Choi Jong-hoon’s birthdays

At the fan meeting, the band also sang some songs from its fourth EP, “Grown Up,” which was released in Korea in January.

During the talking component of the event, the band held a cake-cutting ceremony for the lead vocalist and guitarist/pianist, both of whom have birthdays in early March.

The celebration was extended to congratulate the band’s drummer, Choi Min-hwan, who turned 19 in November.

“It was the biggest concert we’ve ever done, and it was so much fun,” he told the crowd.

The Korean boy band’s song “Neverland” has been chosen as the theme song for the soundtrack of Japanese animation movie “Ozma,” which began airing on March 16.