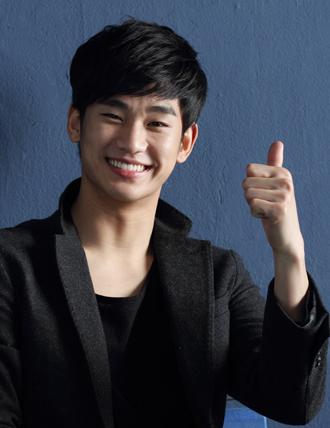 Next time you crack open a bottle of Cass with your buddies, an unlikely figure might come to mind: cutie pie actor Kim Soo-hyun.

Though the 24-year-old isn’t necessarily known for heavy drinking, his outsize popularity has earned him yet another exclusive advertising contract, this one for the iconic Korean beer Cass.

The beer’s maker Oriental Brewery said on March 21 that Kim’s charisma, passion and youthful energy fit in perfectly with the brand’s image, at least in the company’s eyes.

Kim is the face of at least 15 products, according to figures released by his agency earlier this month, and his portfolio includes apparel brands and electronic devices in addition to beer.

Put together, the contracts are thought to bring in more than 5 billion won ($4.5 million) for the young star, who skyrocketed to fame while appearing in the MBC drama “The Moon Embracing the Sun” (2012).