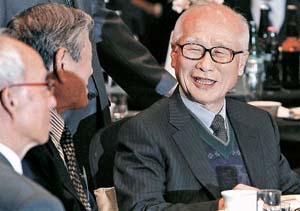 Kim Woo-choong’s eyes welled with tears as he received a copy of a history of the group, from its rise to its 1999 collapse.

The event was organized by Daewoo Inhoe, a private social network for former Daewoo employees, and Daewoosky Institute, established in 2009 as an official corporation. The history was prepared by the institute over the last two years.

Founder Kim, 75, has been attending annual anniversaries since 2009. Kim flew in from Vietnam where he spends most of his time.

The book, “Why Daewoo? The Story of People Who Traveled First and Furthest Overseas,” was written by 33 former executives of the group. It is the first official history of the group.

The book begins with stories about the founding of Daewoo in 1967 and describes its milestones and tells the tale of its fall.

“It’s time that we speak out squarely and with pride,” said Chang Byung-ju, former president of Daewoo Corporation and head of the Daewoosky Institute.

Since the group’s collapse after the Asian financial crisis of the late 1990s, Daewoo executives have been scorned for having caused so much grief to the country and its employees.

Chang strongly criticized former deputy Prime Minister Lee Hun-jai’s recent claim that Daewoo at the time lost the faith of the market due to its weak attempt at restructuring. Lee was finance minister when Daewoo collapsed.

Lee is currently publishing a series of reminiscences in the JoongAng Ilbo.

“The claims by a former high-level official are not only are offensive to any Daewoo men, but there are also many parts that are dubious,” Chang said.

Chang insisted that the reason Daewoo faced severe problems in the late 1990s was because the government cut off all chances of saving itself, including banning the issuance of commercial paper and bonds.

“Daewoo was aggressively expanding overseas, and because we had investments across the globe, our foreign debt was relatively large,” Chang said. “We expected the government to understand the unique situation.”