Kim Jong-un expected to take on roles left by father

Kim Jong-un expected to take on roles left by father 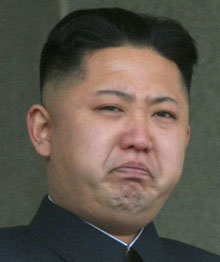 For the first time since late leader Kim Jong-il’s death, North Korea will convene a meeting of its parliamentary body next month, raising speculation that a power transfer to heir Jong-un is going to take place.

Pyongyang’s official Korean Central News Agency said in a statement Saturday that the fifth session of the annual Supreme People’s Assembly will convene on April 13 in the capital and representatives attending the meeting should be registered between April 11 and 12.

Expectation is high that the 20-something successor Kim Jong-un will be promoted to chairman of the powerful National Defense Commission at the upcoming session of the regime’s rubber-stamp parliament. Under the North Korean constitution, as the highest body of sovereign power, the commission can appoint a head of the top military decision-making body, as well as approving an annual state budget and revising the constitution.

Previously, Kim Jong-il was anointed to the head of the commission in 1993, a year before founder Kim Il Sung died. Since Jong-il’s death in December 2011, the position has remained vacant, with heir Jong-un taking the role of vice chairman.

Saturday’s announcement came just a day before North Korean citizens officially ended the 100-day-long mourning period for their late leader on Sunday. The regime convened a full-scale ceremony commemorating Jong-il at the huge Kim Il Sung Square, packed with hundreds of thousands of people, which was televised live by official media. Heir Kim paid silent tribute to his father at the glass coffin at Kumsusan Memorial Palace.

“When the founder died, Kim Jong-il abolished the Central People’s Committee, which was managing the founder’s title juseok [supreme leader], and created the National Defense Commission chaired by him,” Cheong Seong-chang, a senior fellow at the Sejong Institute, said.

“Just like his father did, heir Kim Jong-un is also expected to shut down the National Defense Commission and establish a new committee for his own.”

Speculation is rising that the young heir is also expected to take the title of secretary general of the ruling Workers’ Party at a separate meeting of the party in mid-April. If he does, it will be much earlier than his father, who waited three years after the founder died to take the position. Rodong Sinmun, the ruling Workers’ Party’s official newspaper, also said in a Sunday editorial that “taking the meeting of the party’s representatives as an opportunity, we should strongly build up the one and only leadership of comrade Kim Jong-un,” implying the link between the heir and the party’s meeting.

“When Kim Jong-il succeeded his father, he didn’t have to hurry the transfer of the secretary general, because he already dominated the ruling party at the time,” said Koh Yu-hwan, a North Korean studies professor at Dongguk University.