Lee Dae-ho readies for his debut in NPB

Lee Dae-ho readies for his debut in NPB 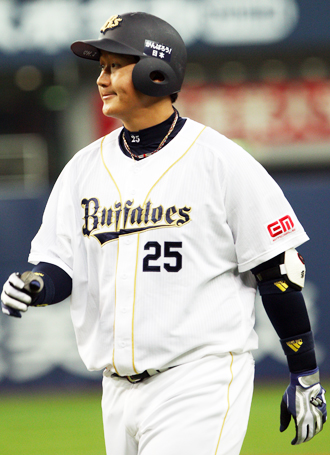 The preseason of Nippon Professional Baseball wrapped up its 20-day spring schedule on Sunday and will begin the regular season tomorrow. For Orix Buffaloes slugger Lee Dae-ho, the only Korean hitter in NPB, the real test has finally arrived.

From his first spring training game against the Hanshin Tigers on March 4 until his last warm-up bout against the Yokohama DeNA BayStars on Sunday, Lee had a .250 batting average, nine hits, three RBI and six strikeouts in 12 games.

The 30-year-old was considered one of the most powerful hitters in the Korea Baseball Organization (KBO) but got off to a slow start with his Japanese club - albeit preseason statistics are a weak measurement.

The former Busan Lotte Giants player was a dominant force at the plate. In 2006, Lee claimed his first triple crown (leading the league in home runs, RBI and batting average).

His performance peaked during the 2010 season, during which he claimed seven of eight offensive titles and was named Most Valuable Player. He finished last season with the best batting average, the most hits and the highest on-base percentage before moving to Japan in a two-year deal worth 760 million yen ($9.2 million).

In an interview with Ilgan Sports, the JoongAng Ilbo’s sports daily, Lee said he is in top form and promised fans to he will step up his game during the regular season.

Q. How’s your condition going into the regular season?

A. I’m thrilled and looking forward to it. I’m ready to play baseball. I have no injuries and no pain. I’m fit to play right away.

What’s your response to some critics who say your performance in the preseason games has not been good enough?

You’ve said that the strike zone in Japan is larger than it is in Korea. Are you adjusted to the new strike zone?

I feel like the strike zone in Japan is bigger than the size of two baseballs compared to Korea’s, but I try not to think about it too much. I asked umpires about the strike zone whenever I met them in either practice games or preseason games. I also watched opposing pitchers’ motions carefully. I think I will be familiar with the strike zone as we enter the regular season.

It was reported that you don’t look into opponents’ pitching data. But how much have you studied Japanese pitchers?

I know the pitching styles and data from team meetings. But when I enter the game, I tend to forget about that aspect. It is true that Japanese pitchers have different timing and throw different types of pitches than Korean pitchers. It’s a little difficult, but there were no pitchers who gave me a really hard time.

Manager Akinobu Okada said that he is worried the team didn’t produce a lot of home runs during the preseason games. Do you already feel pressure to hit home runs as a slugger?

Okada said he never said things like that. Instead, he joked that he is worried because I might perform too well. He treats me like a family member and always tells me not to be too nervous and play like I usually do. Rather than talking about my batting, Okada and I talk about Japanese baseball in general and controlling the pace of the game. A home run is just one type of hit. There are many ways to approach an at-bat. I will show that during the regular season.

Do you feel lonely living and playing overseas?

Not really. Teammate Baek Cha-seung lives right next to my apartment building and I also have my translator Jung Chang-yong. My family also visits often, and we have video calls these days. Through cell phones and social networking services I keep in contact with my former teammates such as Hong Sung-heon, Jung Hoon and Lee Seung-hwa.