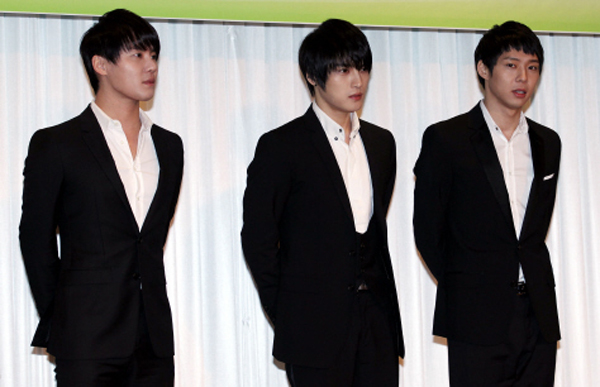 
Hallyu heartthrob trio JYJ has captured the hearts of some of the world’s most influential women. The group performed a special concert on Tuesday for the spouses of world leaders attending the Seoul Nuclear Security Summit.

The performance took place at the Blue House reception hall and was attended by the first ladies of Gabon, Nigeria, South Africa, Malaysia, Vietnam, Switzerland, Singapore, Italy, India, Indonesia, China, Chile, the Philippines and Korea as well as the wives of the UN and European Union delegates.

In total, 16 spouses were treated to a short concert by the K-pop stars, who sang hit songs like “Be My Girl” and “In Heaven.”

Many of the audience members asked to take photos with JYJ.

The Korean first lady, Kim Yoon-ok, approached one member of the group, Park Yu-chun, to wish him well and to say that she was a fan of the drama “Rooftop Prince,” in which he stars.