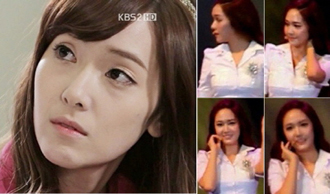 SM Entertainment has spoken out against escalating rumors that Jessica of Girls’ Generation recently went under the knife.

Yesterday, a shot of Jessica in Malaysia circulated online along with a comparison shot of the singer in her role on the KBS drama “Wild Romance.”

Netizens who examined the picture instantly started saying that the 22-year-old star looked remarkably different in the two shots.

In the screen capture of the drama, Jessica looks significantly slimmer than she does in the up-to-date picture, where her face appears rounder.

“Of course she hasn’t had any work done. She was just gaunt for a while because she was busy with the drama and jet-setting around the world,” a representative of SM Entertainment told Star News on Wednesday.

“After the drama, Jessica was able to put on weight due to her improved health.”

Jessica starred in the drama that aired from Jan. 4 until Feb. 23.