A 23-year-old female was found murdered in front of the gate of a residential home in front of Duksung Women’s University in Suyu-dong, northern Seoul, in July 2010.

One year and eight months later, a 37-year-old man surnamed Kang was arrested as the main suspect. He was also charged with breaking into a woman’s home in front of Sungshin Women’s University in Seongbuk District, and sexually assaulting her earlier this month.

The police said on Tuesday that after they arrested Kang, they found in his home 78 wristwatches - mostly women’s - in the cupboard drawer in the living room and 13 kitchen knives. Each knife had a different blade and handle.

Kang said to the police, “When it rains in the morning I feel [criminal] impulses.” The police confirmed that it was raining on the day the young woman was found murdered in Suyu-dong, Gangbuk District. 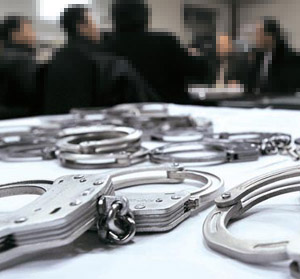 The Seongbuk District Police, through a criminal profiler, is investigating further to see if Kang is linked to other sexual assaults and murders of women.

Because of his elaborate sexual assault methods and the items they found in his home, police state it is likely that Kang is a repeat offender.

After Kang broke into the home of the young woman in Seongbuk District on March 11, he folded her arms behind her back and then bound just her thumb and pinky finger from each hand together with a plastic cord.

Criminal experts speculate there is a high possibility that Kang is a serial murder, and his collection of 78 wristwatches souvenirs of his crimes.

Kang said, “After the murder in Suyu-dong, I couldn’t sleep at night and often experienced sleep paralysis [gawi nulryeotda in Korean, meaning ‘pressed down by scissors’]. In order to erase the memory of the crime, I committed another act of sexual assault.”

But Professor Pyo Chang-weon of the Korean National Police University expressed his skepticism toward Kang’s testimony.

“If you look from the other perspective, [his testimony] can mean that after committing the crime, he felt exhilarated by the act. When it rains, he feels excited or feels strange psychological urges. Because it is difficult to suppress his urges, he may be addicted to acts of crime.”

Pyo said Kang may “collect women’s watches as trophies of his crime and use them to remember the pleasure [of the crime] when he looks at them.”

Kang also is frustrated and pressured by his low salary, and a police officer said that he “has a lot of discontent regarding his economic status and a strong inclination to aggressive tendencies.”

Kang began working for a security business and oversaw security and public order in a redevelopment zone in Gyeonggi in March 2010, several months before the Suyu-dong murder.

The police plans to send the case to prosecutors today.