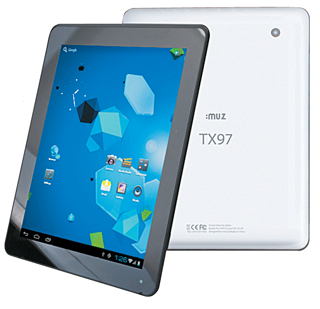 When online retailer Interpark set the price for this 9.7-inch tablet computer at 279,000 won (

The craze for low-priced electronics that started with flat-screen TVs last year has moved on to tablet PCs and even desktops with advanced processors and memory chips.

Retailers have dubbed the trend “half-price fever” and say that the products sell out rapidly.

According to retailers, the low-priced tablet PCs and desktops are made in partnership with small- and medium-size enterprises, but feature advanced processors and operating systems like computers from Samsung Electronics and LG Electronics.

The tablet was much cheaper than Apple’s 16-gigabyte iPad (640,000 won) and Samsung Electronics’ 16-gigabyte Galaxy Tab (670,000 won). The machine runs on the Android 4.0 operating system with one-gigabyte DRAM.

The 100 desktops sold out in one minute.

“We only prepared 100 desktops because we were unsure whether they would get positive responses from customers although they’re fitted with an advanced processor and quick booting system,” said Seo Woo-chul, a Hyundai Home Shopping spokesman. “I guess customers were attracted by the specifications and also found the one-year warranty service attractive.”

Both Interpark’s tablet and Hyundai Hmall’s desktop came with one-year warranties to ensure customers that they can get quality after-sale services even on low-priced purchases.

Auction, an online retailer, started the trend by selling out 1,000 seven-inch, 16 gigabyte tablets with an Android 4.0 operating system on March 5 in 10 minutes. The tablet cost 269,000 won. It started selling the same tablet with a Soul by Ludacris SL49 earphone set for 299,000 won on March 14.

“We originally planned to end the promotion after selling 1,000,” said Kim Seon-yi, spokeswoman for Auction. “We decided to continue because the tablet and earphone set received a positive response from customers.”

“The frenzy over half-priced IT products will continue as many are looking for products with reasonable prices in difficult times,” Jang said.