The show goes on despite protests, shrieks at TIMF

The show goes on despite protests, shrieks at TIMF

The Munich Chamber Orchestra performs on the second day of the 10th Tongyeong International Music Festival on March 24. 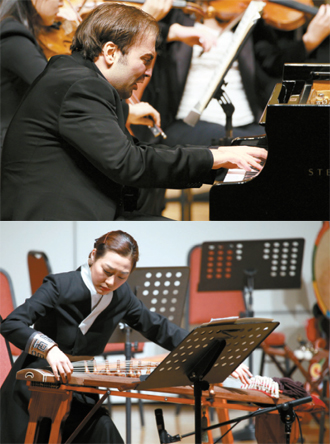 Top : Pianist Alessandro Deljavan from Italy performs during the Isang Yun Competition winners’ series on the final day of the festival on Thursday. Bottom : A member of the National Gugak Center Contemporary Gugak Orchestra plays the Korean traditional gayageum on Tuesday. Provided by the organizers

Like previous years, artists from around the world, including renowned Japanese pianist Yuhki Kuramoto and the Munich Chamber Orchestra, performed during the festival. But the 2012 TIMF experienced a series of mishaps, including distracting protests and jarring shrieks from a trapped cleaning lady crying for help.

Before the festival began, a conservative civic group, the 5-million Korea Cleanup Field Army, held a demonstration in front of the Munhwa Madang near the festival venue calling for the TIMF to be banned, insisting composer Isang Yun was a “pro-North Korea” activist.

The group ended the demonstration by burning the musician in effigy.

Yun, who was born in Tongyeong and later obtained German citizenship, became a highly praised musician in the late 1950s with compositions that combined Korean and Western classical music traditions.

But in November of last year, the renowned musician was embroiled in controversy as hundreds of conservative activists staged a rally in front of the musician’s memorial in Tongyeong, insisting that Yun lived a life of luxury in return for sending “the Daughter of Tongyeong” Shin Suk-ja and her two young daughters to North Korea, and branding the composer a traitor.

A defector, Shin is said to have been imprisoned in the Yodok concentration camp in North Korea’s South Hamgyong Province along with her two daughters in 1987. Protesters claim that it was Yun who encouraged Shin to defect to the North in 1985.

The issue was first raised when Shin’s husband Oh Kil-nam insisted late last year that Yun played a critical role in bringing his family to the North and said that the act was part of Yun’s pro-North Korea activities.

Protestors have gone a step further and insisted that Yun was a spy for the North, demanding that all traces of him be razed from the city.

Amidst such heated controversy, TIMF organizers limited the number of placards and banners throughout the city, unlike previous years when at least 200 banners were put up.

“I didn’t even know that the festival had started,” said Song In-sang, a 60-year-old taxi driver in the city. “Until last year there were so many [advertisements] that it was difficult for us to ignore it, but this year, it feels very different. There are not as many people and few foreigners.”

The TIMF’s troubles didn’t stop there.

During the Munich Chamber Orchestra’s performance on the second day of the festival, joined by renowned Korean pianist Kim Da-sol, a piercing high-pitched scream interrupted the concert.

The orchestra pushed through with its song despite continued shrieks and the sound of someone thumping on a door calling for help, leaving the audience in shock.

The screaming from the second floor of the grand hall went on for some 20 minutes. Organizers announced during intermission that the scream came from a cleaning lady who was stuck inside a lighting room.

She was cleaning the area when the door shut accidentally, locking her inside.

Despite the protests and embarrassing screaming incident, the week-long festival pushed through and consisted of some impressive performances. While organizers admitted there were some big and small mishaps during the 10th TIMF, they said that overall it was still a success.

Each year, the TIMF is organized under a different theme originating from the titles of Yun’s works. This year’s theme was “Without Distance.”

According to Alexander Liebreich, who became the artistic director of the TIMF last year, this year’s theme “implicates the residential program of artists and composers from East and West.”

“?‘Without distance’ refers to the direct contact between the public and the performing artists and it also challenges us to think about the roots we have to respect and the evolution we are responsible for, not only in cultural but also social aspects.”

The composition “Distanzen” (1988) by Yun is to be seen exactly in this context, added Liebreich.

The festival began with the Tongyeong Festival Orchestra under the baton of Liebreich, who was praised as “the most interesting conductor in Munich.” The orchestra first performed “Meditation for Orchestra - To the Victims of Tsunami 3.11,” written by Japanese musician Toshio Hosokawa to commemorate those who lost their lives in Japan in March of last year.

“For a decade, the Tongyeong International Music Festival has highlighted the musical achievements of Isang Yun and tried its best to fulfill its work as a cradle for creative Korean music,” Lee said. “It has also provided ways for the city to grow as a center of cultural arts.”

Keller Quartett, Trio Medieval and vilonist Carolin Widmann presented the natural combination of classical and contemporary repertoire on the second day while the Munich Chamber Orchestra, guitarist Kauhito Yamashita and the Capella St. Petersburg performed on the third day.

The competition became a member of the World Federation of International Music Competitions in 2006. The Isang Yun Competition rotates between its featured instruments - the piano, cello and violin - each year. The piano section of the competition will take place in October. Last year, Taiwanese violinist Yu Chien Tseng won the competition.

Finally, the Beat Furrer Music Theater closed the festival with their performance of “Fama.”

For the past decade, a total of 6,544 musicians from across the globe have performed on the stage of the TIMF, holding 211 performances. Concerts by highly praised musicians, whom even Seoulites can’t enjoy, came to this small city of 140,000 to please the ears of 840,000 people.

Liebreich, the artist director, said, “International musicians are interested in this small city despite being far away from the capital city as it is the birthplace of Isang Yun,” explaining that Yun mentioned that his dedication to music initiated from his love toward his hometown.

“The TIMF will keep on challenging new things and making efforts so that people can enjoy the beauty of the music along with the fine landscape of the city.”

Tongyeong Mayor Kim Dong-jin also said, “This festival must become one that people all over the world, not just in Asia, enjoy and possess. We are starting on a harsh road to make the festival one that the people of Tongyeong and people of all races and colors can come together to enjoy.”