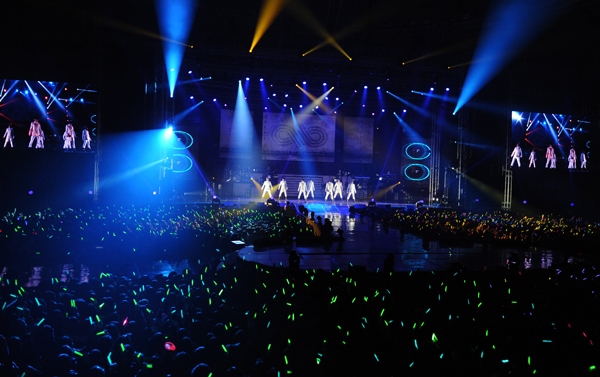 
Boy band of the moment Infinite wowed fans for the second time at their sold-out encore concert “Second Invasion – Evolution,” which took place on April 1 at Olympic Park in eastern Seoul.

The concert was staged again due to demand after the band performed at the same venue just one and half months ago.

Fans from Asia and all over the world attended the concert which was packed full of special effects, individual performances and an introduction to the band’s new album to be released in May.

For fans, the highlight of the concert was when Sungkyu sat at the grand piano and sang “Only Tears,” which will be on the band’s upcoming album.

“It’s a new ballad piece that the band recorded together, but I prepared it as a solo piece just for the concert,” said Sungkyu.

Meanwhile the other band members let fans in on a secret: The track may be the title track of the new album.

As well as singing their hit songs “Paradise,” “Be Mine” and “Hysterie,” Sungyeol performed his rendition of “SexyBack” by Justin Timberlake while Hoya sang Omarion’s “O”. Sungjong had the audience in stitches when he emerged in drag to sing “Coming of Age” by Park Ji-yoon.