The Al-Shuweihat 2 independent water and power plant in Abu Dhabi, United Arab Emirates, is slated for completion in June. Provided by the company


Samsung C&T, which is undergoing an extensive makeover to change from a domestic apartment builder into a global total service provider, is now looking beyond Southeast Asia and the Middle East to reach into more advanced markets.

The country’s second-largest engineering and construction (E&C) company has decided to strike a balance between its domestic and overseas operations and aims to win 50 percent of its orders this year from abroad.

Samsung C&T has invested $100 million to buy a 15 percent stake in the $5 billion project in northern England. It will be responsible for conducting the entire engineering, procurement and construction process, it said.

This makes it the first E&C company to receive a power plant project order from Britain, which is increasingly trying to lower its carbon footprint by focusing on eco-friendly projects.

“The Don Valley project is significant for Samsung C&T to expand its value chain,” said Lee Wang-sang, an analyst at Woori Investment & Securities. “The project will serve as an opportunity for Samsung to target not only the Middle East, but also advanced markets.”

As Samsung C&T continues to bag plant orders from abroad since last year, the financial market has released positive outlooks for this once-struggling apartment builder. It has recently been evaluated as having successfully transformed itself into a more global business rather than a major player in the domestic market.

The company was awarded orders worth a total of 5.2 trillion won ($4.6 billion) from outside Korea in 2011, the largest amount in one year since its foundation. Its largest order to date was a $2.85 billion contract for a power plant in Saudi Arabia.

Behind the makeover of Samsung C&T lie the efforts of CEO Jung Yeon-joo. Jung is highly recognized for his achievements at Samsung Engineering after he turned a $1 billion company into an $8 billion copany in the space of seven years. He returned to Samsung C&T in 2010 after serving as the chief at the engineering company and has targeted orders of 16 trillion won this year.

Under his stewardship, Samsung C&T is working on improving weaknesses such as its engineering, operation and management capabilities to expand its value chain as a total E&C service provider. 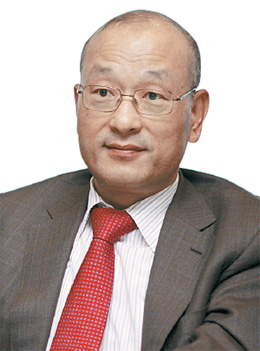 “The return of Jung, who is famous for generating strong overseas sales and marketing operations, has had a positive impact on the company,” said Lee Gwang-soo, an analyst at Hanwha Securities.

Samsung C&T was considered one of Samsung’s so-called “ugly ducklings” until 2008 due to its poor profitability, according to market observers. Sales grew 52 percent from 2001 to 2008, which paled in comparison to the 125 percent growth rate of the group’s electronics unit and 152 percent expansion notched by its engineering units.

Although Samsung C&T had a strong reputation for building luxurious, high-tech skyscrapers, such as the Burj Khalifa in the United Arab Emirates and Taipei 101 in Taiwan, its ventures overseas were limited.

But the poor health of Korea’s housing market, which has been stagnating since the 2008 credit crunch, led it to broaden its horizons and begin looking into other markets - somewhat belatedly compared to rival E&C firms. 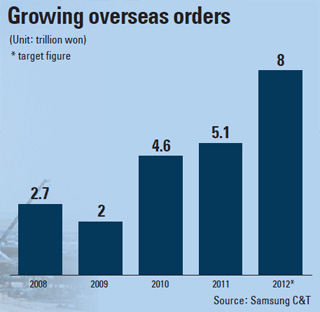 It is now chasing foreign projects more aggressively than its domestic rivals by buying stakes in them first, according to Sohn Soo-keun, an official at the company.

He said that buying an interest in such projects is a new form of participation that gives clients more trust in the project executor.

“While the construction unit has 15 branches, the trading unit has as many as 54 branches abroad, more than any other Korean E&C company,” said Yoon Jin-il, an analyst at IBK Securities.

“Because the construction unit can get financing from its trading unit, Samsung C&T is able to snatch more overseas projects independently without relying on other trading firms.”