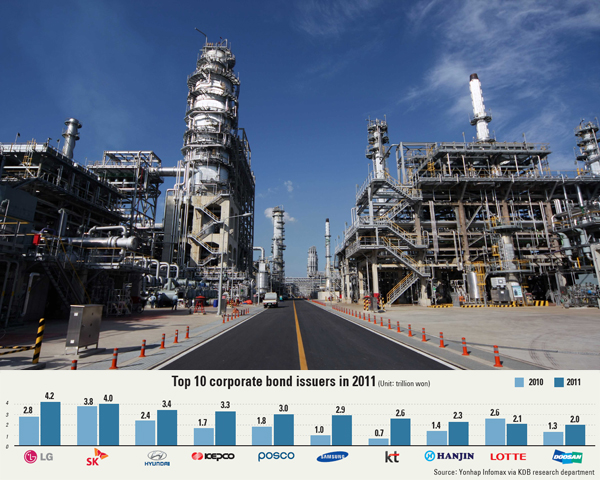 The picture shows the third heavy oil upgrading (HOU) facilities of GS Caltex in Yeosu, South Jeolla. The company has issued the largest batch of corporate bonds among Korean firms this year to raise funds for a fourth HOU facility and pay off maturing bonds. Provided by the company


GS Caltex, the leading domestic oil refiner by market share last year, has been kicking its corporate bond issuance up a notch.

Issuing more than any other Korean company so far this year, the refiner expanded its planned March offering by 200 billion won ($176 million) to sell 500 billion won in 7-year corporate bonds last Friday. This came hot on the heels of it issuing 350 billion won worth of 5-year debt in January in response to vigorous investor demand.

“The demand was bigger than expected because the company is considered to be such a blue chip,” said a corporate bond specialist at one of the underwriting securities firms.

With a high credit rating of “AA+,” GS Caltex was able to move the large batch of paper to help fund some 1.1 trillion won of investments in its fourth “heavy oil upgrading” facilities that treat hydrocarbon in petroleum products to increase their value, as well as pay back old corporate bonds due to mature.

Like those of its Asian counterparts, Korea’s corporate bond market is experiencing a high tide of demand. Companies are offering more bonds to meet greater demand for high-return investments in an age of ample liquidity and low interest rates before economies sour further and borrowing costs rise.

However, experts point out that the inflow has been limited to local blue chips, and there are indications that the blue chips prefer to hold on to their newfound cash rather than invest in new ventures in preparation for harsher times.

And this year appears no different. Some 25.1 trillion won of corporate bonds were issued during the first three months of 2012, far outpacing the 16.6 trillion won delivered over the same period last year, or 13.8 trillion won the year before, according to data from the Korea Finance Investment Association.

The value of bonds sold by blue chip companies across the Asia-Pacific region except Japan also reached an unprecedented $14 billion since the beginning of this year, according to a Feb. 23 report by the Wall Street Journal, quoting Dealogic data.

The swelling market has been facilitated by the abundant liquidity unleashed in recent years by U.S. and European central banks to overcome economic tight spots, plus a lack of well-paying investments that makes the comparatively higher yields of corporate bonds more attractive.

“The global trend for low interest rates caused corporate bond issuances to reach record levels in 2011, even exceeding that of 2009, when companies’ financing needs spiked in the aftermath of the 2008 crisis,” said Jerry Kho, a researcher at Korea Development Bank (KDB). “Companies’ efforts to secure funds early in preparation for an economic slowdown played a part as well.”

However, the rising tide is not lifting all boats as the gap between smaller, low-grade companies and high-grade conglomerate affiliates has never been greater in the local bond market.

The 10 conglomerates with the most bond sales last year issued roughly 30 trillion won in total, with the combined affiliates of LG Group and SK Group offering more than 4 trillion won, respectively.

But much of the cash flowing into these major corporations does not appear to be materializing into business investments as companies show signs of hoarding cash for tough times ahead.

According to the annual accounts for 2011 submitted by 37 companies with fiscal years ending in December, out of the top 100 Korean companies in terms of market capitalization, the total cash and cashable assets of these companies rose by more than 13 percent from 2010 by reaching 52.3 trillion won.

“Due to the global economic slowdown, exports are decreasing not only in Korea, but in greater Asia and North America,” said Kim Min-jung, a research fellow at Hyundai Research Institute. “Coupled with anemic demand in both domestic and foreign [economies], large companies’ investments in facilities and new businesses will continue to contract.”

In addition to companies issuing bonds to pad their cash holdings and prepare for the repayment of some 38 trillion won in corporate bonds that will mature this year, experts expected recent regulatory reforms will further advance the local market.

“The domestic corporate bond market is currently at a crossroads for long-term progress,” said Kho. “New regulations [enforced since February], such as underwriters’ responsibility to conduct closer risk reviews of the issuing company, are expected to have positive effects.”