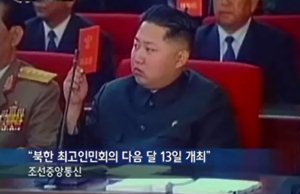 North Korea will convene a ruling party meeting where heir Kim Jong-un is most likely to be inaugurated as the party’s secretary general on April 11, the same day the neighboring South holds legislative elections.

South Korean saw the meeting as part of efforts to consolidate the 20-something successor Jong-un’s ruling.

“The meeting is a political and military event for North Korea,” Kim Hyung-suk, spokesman of the South’s Ministry of Unification, told reporters at a briefing yesterday. “Basically, holding this kind of event is interpreted as part of procedures to stabilize new leadership in the aftermath of Kim Jong-il’s death.”

The meeting of the ruling party’s representatives has been held only three times in the regime’s 64-year history. Each time crucial political decisions were made, such as eliminating anti-communist politicians opposing founder Kim Il Sung in 1958 and launching the nation’s official “military-first policy” in 1966.

In September 2010, at the third meeting of the party’s representatives, Kim Jong-un made his first public appearance. There, he was appointed to vice-chairman of the top decision-making body National Defense Commission and a string of military officials were promoted to inner-circle power.

Analysts in the South say the rare party meeting is part of the plan to mark the April 15 centennial of founder Kim Il Sung’s birth and boost the emerging leadership of Kim Jong-un.

“North Korea is currently putting all of its efforts into promoting its slogan of ‘strong, prosperous nation’ and declaring the new era of heir Kim Jong-un ahead of the April 15 founder’s birthday,” Yang Moo-jin, a professor at University of North Korean Studies, told the Korea JoongAng Daily yesterday.

“And a flurry of events will follow the meeting as part of its official schedule - a satellite launch on April 12, the Supreme People’s Assembly on April 13, and a large-scale military parade on April 15.

“Appointed to the secretary general of the party, Jong-un will also be made a member of the presidium of the party’s political bureau and given the military title wonsu, meaning marshal,” Yang said. “With the nation’s three major titles under his belt, Jong-un will watch the satellite launch on the next day.”

Cheong Seong-chang, a senior fellow at the Sejong Institute, said the next promotion left to the heir is chairman of the powerful military body, the National Defense Commission.

“Given the previous succession procedure of late leader Kim Jong-il, his father, heir Jong-un will be appointed to the head of the National Defense Commission or some other newly created military body.”