Surveillance case could have major impact on voting

Surveillance case could have major impact on voting 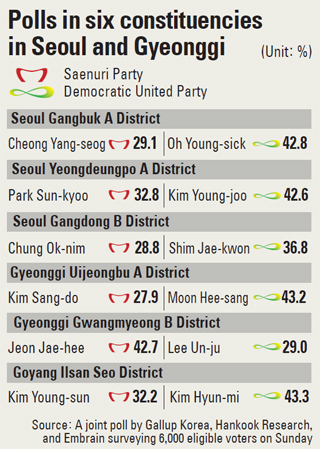 The illegal surveillance scandal could have a significant impact on the April 11 legislative election, recent polls said, putting the ruling party at a noted disadvantage.

According to private research institute The Opinion, 71.6 percentile of 800 eligible voters who responded to a poll on Sunday said that they think the illegal spying by the Prime Minister’s Office will have an impact on the upcoming general election.

In another poll conducted by the Korea Society Opinion Institute on March 31, 67.4 percentile of the entire 800 respondents said the ruling party will be at a disadvantage.

A joint poll conducted Sunday by three research firms - Gallup Korea, Hankook Research, and Embrain - surveyed 6,000 eligible voters in 10 constituencies nationwide and showed the main opposition Democratic United Party candidates were ahead in five out of six electoral districts in the Seoul and Gyeonggi regions.

Poll analysts say that voters in the Seoul and Gyeonggi regions respond to current affairs more sensitively than those in other regions, given the previous cases, so the opposition’s increased support reflects their response to the illegal surveillance scandal.

The joint survey also shows some DUP candidates earned increased support compared with the previous poll conducted on March 25 in the region. For instance, Kim Hyun-mi, a DUP candidate, gained 8.9 percentile more in the poll than previously in Ilsan, Gyeonggi, while her competitor Kim Young-sun, a Saenuri candidate, obtained only 4.0 percentile more.

“The illegal surveillance scandal intensifies criticism against the current administration, which is basically becoming a disaster for the ruling Saenuri Party,” Bae Jong-chan, a senior analyst at Research & Research, said.

In 2000, only three days prior to the general election, the Kim Dae-jung administration announced a plan to hold an inter-Korean summit with the North, but the opposition Grand National Party won the race. In 2002, opposition candidate Chung Mong-joon withdrew his endorsement of liberal candidate Roh Moo-hyun a day before the presidential election, but Roh won the race. Many analysts say the broken alliance even brought more votes to Roh.

In June 2010, expectations were high that the ruling, conservative Grand National Party would win the general election because of the sinking of the warship Cheonan, but the GNP lost.

“If a new allegation related to the Roh administration comes out, it could instead create a backlash for the opposition parties,” said Lee Taek-su, president of research firm Realmeter.

Still, the DUP is unsure of victory. “We saw 50 percent of respondents in a poll saying the current administration should be judged, but we still have only about 25 or 30 percent of approval ratings for the party,” said Park Sun-sook, a DUP lawmaker and the director of the party’s campaign. “The mounting public condemnations against President Lee Myung-bak aren’t directly linked with attacking Saenuri’s interim leader Park Geun-hye. We now see increases in polls at 70 or 80 constituencies where we used to struggle. Up until last week, we were losing to Saenuri in the polls, but now we are speedily chasing the ruling party in those regions after growing public discontent with the Lee administration.”

Kim Ki-sik, a campaign manager of the DUP, also said, “The upcoming race is expected to become a battle between older and younger voters, and if the overall turnout exceeds 55 percent, the DUP will win.”