Surveillance may date back to Roh

Surveillance may date back to Roh 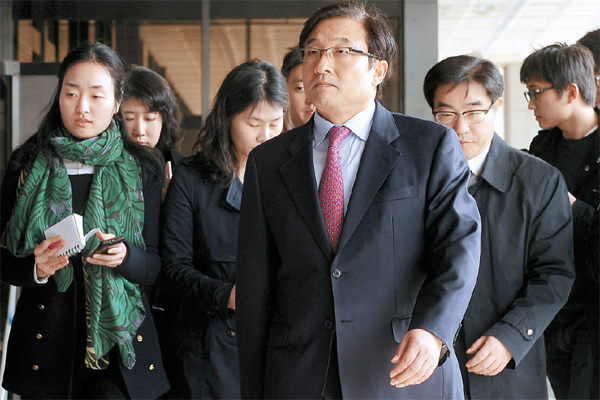 Lee Young-ho, foreground, former senior secretary to the president for employment and social welfare, turns himself in at the Seoul Central Prosecutors’ Office on Saturday. Lee had claimed he was solely responsible for the civilian surveillance scandal. [NEWSIS]


Following the shocking revelation that the Prime Minister’s Office allegedly conducted some 2,600 cases of illegal surveillance on civilians as reported by the state-run Korean Broadcasting System (KBS) network’s labor union last week, the Blue House is claiming that 80 percent of the surveillance occurred during the Roh Moo-hyun administration. 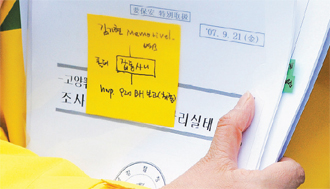 Park Young-sun, a lawmaker of the main opposition Democratic United Party, holds a file of documents she claims contains reports of illegal surveillance of civilians on Friday at a news conference. One document shown in this photo is dated Sept. 21, 2007, when the Roh Moo-hyun administration ran the nation. [NEWS1]

Blue House spokesman Choe Geum-nak said yesterday, “It has been revealed in the previous administration [Roh Moo-hyun’s] that the Prime Minister’s Office investigative team has inspected both civilians and representatives of both ruling and opposition parties on multiple accounts.”

A day earlier, Moon Jae-in, former chief of staff of the Roh administration, posted a tweet saying that the accusations were all “nonsense” and demanded that “it [the Blue House] reveal all related documents.”

Moon, who is also a liberal presidential front-runner and a DUP candidate in Busan’s Sasang District, tweeted, “The purpose of keeping [surveillance] records during the Roh leadership was to inspect public offices.” He criticized the current government for blaming the past government for the growing scandal.

But Choe responded to Moon, listing names of both politicians and civilians, including then-Democratic representative Kim Young-hwan as well as Incheon Metropolitan City’s basketball league chairman in 2003 and the head of the National Chartered Bus Association in 2007, and said, “I would like to know if these people are politicians or civilians to Representative Moon.”

The Blue House said on Saturday that based on the creation date of the 2,619 reports revealed by the KBS labor union, around 2,200 documents were generated between 2006-7 and thus were from the late President Roh’s administration. Prosecutors confirmed that about 1,000 of these were reports on police activity.

There were some 480 reports related to the Mugunghwa Club, an association of former and current policemen known for being critical of the current administration between 2006 and 2007.

A photo of a Democratic United Party representative holding the leaked documents printed in the Seoul Shinmun on Friday tipped off the Blue House that the 2,619 documents were not all from the Lee administration.

The photo showed documents which dated back to Sept. 21, 2007, indicating that some were generated under the Roh administration.

Regardless of under which administration the crux of the surveillance lies, senior prosecutor Chae Dong-wook of the Supreme Prosecutors’ Office said at their headquarters in Seocho District, southern Seoul, in a briefing yesterday afternoon, “The prosecution believes that each allegation needs to be investigated and accounted for as soon as possible.”

Prosecutors announced yesterday that an arrest warrant has been filed for Lee Young-ho, 48, former senior secretary to the president for employment and social welfare, for destruction of evidence regarding the illegal surveillance of civilian businessman Kim Jong-ik.

To follow up on the Blue House, the Prime Minister’s Office’s Yim Jong-ryong said yesterday at a press conference at the Central Government Complex in central Seoul that the office has nothing to hide and that, “If there needs to be investigations on the documents that we have, we will gladly offer them.”

Yim confirmed there were documents from the previous administrations including that of President Roh and President Kim Dae-jung, and said that the reports leaked to the public included data and studies on political figures from both parties, civic organizations and the press.

The Prime Minister’s Office clarified yesterday that some 450 files were created between 2008 and 2010, during Lee’s administration, and only 121 of them were government probes. Some 20 cases are under review to confirm if they breach the authority of the office and that most of the documents detailed reports within the authority of the public ethics office of the Prime Minister’s Office.

It claimed that these reports had already been examined in a July 2010 prosecutors’ probe on the cover-up of the illegal surveillance of Kim Jong-ik, who lampooned President Lee Myung-bak on a video blog in 2008. Only two cases, including the surveillance of Kim, were the only illegal cases, the Blue House said. Yim also clarified whether there were “orders” to report to the Blue House after destroying illegal surveillance evidence and stated that rather, there was “a request for notification” to the Blue House. “The Blue House, not just for the tasks from its public offices, but any civil administration, requests notification of the results of the completion of such task.”

The cover-up of evidence of surveillance on Kim Jong-ik in July 2010 was the catalyst which led to the indictment of seven officials from the public ethics office. The case was opened for reinvestigation last month after a former Prime Minister’s Office official, Jang Jin-su, claimed that he had received hush money to keep mum on the link between the Blue House and the cover-up of the illegal surveillance on Kim. The Lee administration has been under fire for several weeks for a scandal that has been compared to Watergate in Korea.

Thus far, during the prosecutors’ investigation process, search warrants for nine places have been filed, while 10 people related to the illegal surveillance including Lee Young-ho and Choi Jong-seok, former staffer of the Office of the Senior Secretary to the President for Employment and Social Welfare, have been summoned so far.

A USB flash drive containing the 2,600 reports leaked to the KBS labor union was confirmed to belong to Seoul Metropolitan Police Agency senior security service officer Kim Ki-hyeon, 42, who had been on duty at the public ethics office in 2010. It was the same USB confiscated by prosecutors for the illegal surveillance trial later that year.

In a more direct response to the deepening surveillance scandal, the ruling conservative Saenuri Party on Saturday urged the National Assembly to set up an independent council to investigate the past and current government’s alleged cases of spying on public officials and private citizens. It also called for efforts to get rid of the wrongful practices of the past.

“I had hoped that [the overall scandal report] would turn out to be untrue, but it looks like 80 percent of the disclosed surveillance cases were compiled during the former administration, which shows that all governments are not free from conducting illegal surveillance,” said Park Geun-hye, the interim leader of the ruling Saenuri Party and leading presidential candidate. Her comments were made yesterday as she was campaigning for her party’s candidates in Busan.

“The government’s role is to protect its people and support them, but it illegally inspected them, which should never happen,” she said, adding that there were several media reports that the previous Roh Moo-hyun and current Lee Myung-bak governments have extensively spied on her as well. “Now is the time to end such illegal civilian surveillance practices.”

DUP Chairwoman Han Myeong-sook, however, criticized that “the ruling party is suggesting an independent council probe into the issue to win more time before the legislative elections.” The elections are slated for next Wednesday. Han served as prime minister during the Roh presidency.

“There should be immediate measures taken to reveal the truth,” she said, urging Minister of Justice Kwon Jae-jin, former senior secretary for civil affairs, to step down from his post, the prosecution to entirely replace investigators and create a special investigation team, and the government to fully disclose related documents.

“The illegal surveillance of civilians that was only found under the Park Chung Hee military dictatorship in the past has torn down the country’s democracy,” Han said.

Lee Hae-chan, former prime minister under Roh and currently a member of the DUP Supreme Council, even urged President Lee Myung-bak to step down and take responsibility if he is found to be directly involved in the illegal surveillance case.

Members of the second KBS labor union said during an online news program on Friday that they obtained 2,691 reports written by officials of the public ethics office of the Prime Minister’s Office between 2008 and 2010. In their report, they stated that the public ethics office’s investigations included mostly those that were on civilians that criticized the current administration, including a Seoul National University Hospital labor union, because a member put up a poster lampooning the president in their office, on anti-government civil groups, clubs and even journalists who were critical of the government.