Actor Kang Shin-il, 52, who has been fighting liver cancer for five years, works out at the Samcheong Park in central Seoul.


Late last month, actor Kang Shin-il, 52, was taking an afternoon stroll in Samcheong Park in central Seoul when a JoongAng Ilbo reporter visited him. Although he had stayed up nearly all night shooting the JTBC drama “Balhyo Family,” he didn’t miss out on his regular exercise.

Kang has been fighting liver cancer for five years. 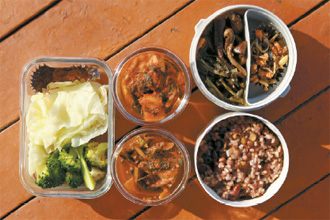 Salt-free vegetables and a bowl of multigrain rice that Kang now eats for lunch. [JoongAng Ilbo]

When he was diagnosed in 2007, he had one-third of his liver removed. After the surgery, he decided to move to a remote mountain village in South Chungcheong.

But six months later, his passion for acting - which Kang referred to as “his reason for existence” - brought him back to the capital, determined to continue his career.

Although the battle is still ongoing, Kang said he “thanks cancer,” as his life completely turned around due to “the unexpected visitor.”

Although he entered university to major in electronic engineering, Kang put aside his studies to spend day and night in Daehangno, the theater district in central Seoul. He formed a troupe called “Testimony” and began performing at smaller venues.

Kang found himself at the center of the theater boom in Daehangno in 1987 with his play “Cholsoo and Mansoo,” which centered on the absurdities of society.

“If theorists, philosophers or religious leaders guided people to understand the value of life in the past, I believe actors play that role today,” Kang said. “Theater is a means to communicate with the community.”

Kang said he often stayed up all through the night drinking with his colleagues after performances, talking about their love of theater.

“I felt that I would be more than happy to die after putting all my passion into theater,” said Kang. “But I’ve realized that was such a selfish thought. I didn’t think about my family.”

For Kang, taking care of his health was not the highest of his priorities. He said he believed being picky about what foods to eat was a luxury. He lived under this principle for more than 20 years, and says now that he is “somewhat regretful.”

“It’s no doubt that my body is suffering now that I’ve mistreated it for decades with an irregular lifestyle as well as an unbalanced diet,” he said.

The actor was first diagnosed with a serious medical condition after he got married. Doctors informed him that he had the hepatitis B virus.

Kang said he never missed a medical checkup. “I promised my wife that I would get one every year.”

But in 2007, when he turned his attention from theater to film and television dramas, he suddenly lost significant weight and began vomiting without a clear cause. He thought it was probably his love for alcohol and cigarettes that was causing the weight-loss. But when he began suffering from insomnia, he decided to go see a doctor.

“My doctor told me that there was a tumor in my liver. I was stunned into silence by his announcement,” recalled Kang. He said he couldn’t regain his senses until his wife tartly said, “You should have your last cigarette.”

Two months later, in December 2007, Kang was hospitalized at the Asan Medical Center in Seoul.

After a series of medical tests, Kang was told that the tumor could be removed as the cancer cells were bunched up in one spot rather than being spread throughout.

“I can’t explain how pleased I was with the cancer cells for being close together,” Kang said.

After removing a third of his liver, Kang’s doctor told him that he should now take care of his body in order to survive. Thus Kang decided to head to South Chungcheong.

“I wanted to strengthen my immune system by being away from the television and computer,” Kang said. He couldn’t possibly take care of his body in Seoul, where he constantly suffers from insomnia, he said.

After acting for 28 years, Kang put his career on hiatus to focus on his health. He began eating a healthy diet, made up of wild herbs, bean paste stew and brown rice. He kept up his spirits by singing and playing his guitar.

Every morning in the countryside, Kang said he packed a healthy lunch box and climbed up the mountain for four to five hours, telling himself he was being cured with every step he took.

“I was anxious about fighting cancer so I thought such strenuous exercise would help me,” said Kang. “But I didn’t know it would put stress on the liver. I now only engage in light exercises such as strolling or stretching.”

After six months, Kang came back to Seoul and resumed his career as an actor.

He said when his colleagues head to a restaurant, he eats a packed lunch in his car by himself. Kang makes his own kimchi with radishes and cabbages he grows in a small garden in the countryside. He also grows spinach, chives and sesame leaves in the garden to make his own side dishes.

“It’s so fun to grow your own ingredients,” said Kang. “I can’t even believe I would change so much that I’m doing the things I once despised.”

But despite his lifestyle changes, Kang is all too aware of how blind cancer can be. While he recovered in a remote mountain town, his friend and older brother died of cancer.

“I felt guilty to be alive,” said Kang. “But now, I thank the cancer.”

It was like a “helping hand from God,” he said. Before being diagnosed with cancer, he was “full of arrogance and only knew about himself.” But through the battle, he was “humbled.”

Kang said his performance as an actor had also changed thanks to the illness.

“Due to suffering from cancer, I realized the power of consideration, understanding others,” Kang said. “So I want to communicate more deeply with the audience through my performances.”